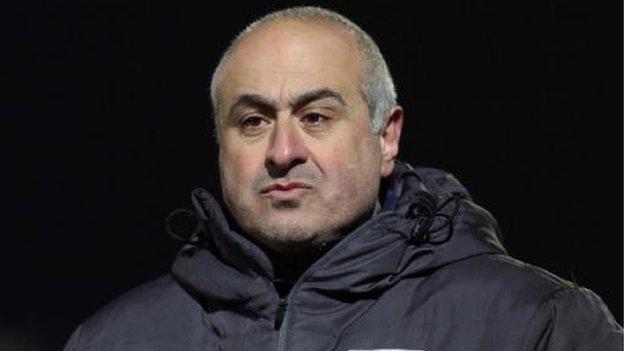 AFC Telford interim manager John Psaras has not ruled himself out of contention to be considered for the much sought-after vacancy at the Bucks Head.

Despite lifting dressing room spirit, he is yet to halt the Blue Square Bet Premier bottom club's winless run.

His short-term objective remains simply trying to avoid relegation, but Psaras could yet be tempted to stay on longer.

He told BBC Radio Shropshire: "I've got a job to do until the end of the season - then I'll speak to the chairman."

Who will be next Bucks boss?

BBC Radio Shropshire's Nick Southall analyses some of the many contenders . . .

"I understand the club is looking for someone who knows the non-league circuit like the back of their hands, who can embrace the club's philosophy.

"John Psaras has demonstrated his ability to get the best out of a side short on confidence and stands a chance of getting the nod.

"They're on the verge of winning a second title in a row by the biggest-ever margin in the league's history. They're in the semis of the Welsh Cup, a competition they won last year without conceding a goal, and are Champions League regulars.

"Former Hyde manager Gary Lowe has the credentials, having won the Blue Square Bet North last season, while Kevin Wilkin (Nuneaton) and Carl Heeley (Worcester) have also been linked with the post.

"An outsider to consider could be Vauxhall Motors boss, Carl MacAuley, a former Telford player. He's worked wonders at the Ellesmere Port club since taking over. And maybe also Steve Kittirick at Guiseley."

Telford have shown signs of a revival in the three games since 47-year-old Psaras stepped up from his role as first-team coach on 11 March, following previous interim boss Graham Hyde's decision to quit.

After starting with a 0-0 home draw against Gateshead, his side then lost 5-2 at Woking on Saturday, finally buried only by two late goals after a spirited second-half revival from 3-0 down, before another injury-time strike in Tuesday night's 2-1 defeat by promotion-chasing Macclesfield.

That left them 11 points adrift of safety, with just six games remaining. And, if they fail to win at Lincoln on Saturday, they will inherit an unwanted Conference record by breaking AP Leamington's run of 26 games without a win, which dates back to the 1981-82 season.

Despite that, Psaras, brought to the club by former boss Andy Sinton in June 2010 after 18 years on the academy staff at Walsall, is understood to be a serious contender.

Kevin Wilkin, boss of Blue Square Bet Premier rivals Nuneaton, and Carl Heeley, in charge of Worcester City a division below, are also both under consideration and "flattered" to have been linked with a job which, as generally happens whenever a vacancy occurs at the Bucks Head, has attracted dozens of applications.

Telford started 2013 with Sinton in charge until his sacking on 31 January after the Bucks had slipped into the bottom four, having not won a league game since 9 October.

The board then turned to Hyde, who quit after just two matches in charge, forcing Telford to turn to Psaras who became their fourth manager in just 39 days.