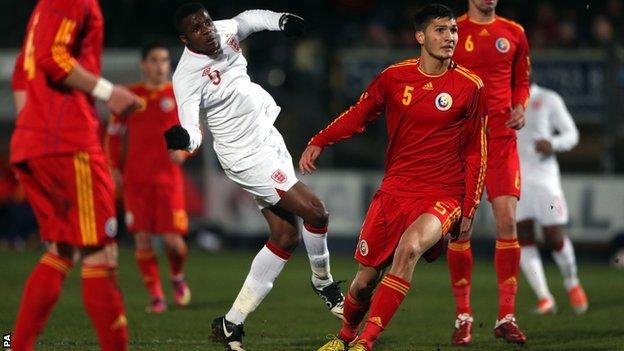 Wilfried Zaha set England Under-21s on their way to a 3-0 friendly victory over Romania at Adams Park.

Zaha's first-half strike was his first for the Under-21s.

"I can't really explain it; I'm just happy to get that goal finally," said Zaha, who will join Manchester United in the summer.

"England's preparations are continuing very nicely: an eighth win in a row, no goals conceded in those games, 18 scored and they were totally dominant.

"Raheem Sterling and Wilfried Zaha were the star performers and how Sterling hadn't scored by the time he was taken off just after the hour was a wonder. But he did tee up the first for Zaha.

"Next up is Austria at Brighton's Amex Stadium on Monday night, then Stuart Pearce will have to select his squad for Israel."

The impressive Zaha's goal was a brilliant curling effort into the top corner after he had jinked past a number of defenders.

It put England on the road to victory in the first of two warm-up games in the space of five days ahead of the European Championships in Israel this summer.

Zaha, who has won one cap for the England senior side, told BBC Sport: "We've got a massive chance.

"The strikers can focus on scoring goals because we know at the back there are no goals being conceded. It's lots of fun; everyone's on my wavelength."

England made a poor start when Henri Lansbury, making his first Under-21 start in more than a year, went off injured in the second minute following a challenge with goalkeeper Laurentiu Branescu.

Raheem Sterling and Zaha tested Branescu before the latter's opener.

Jonjo Shelvey fired in a fine cross to the back post for Liverpool team-mate Robinson to volley in a second in the 64th minute.

Blackpool's Delfouneso, on loan from Aston Villa, wrapped up a comfortable win two minutes from time with a close-range strike.