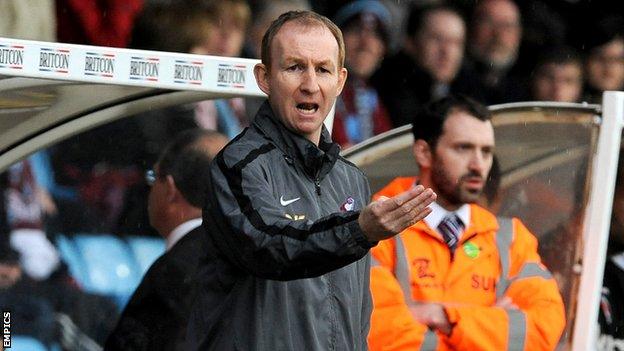 Torquay United boss Alan Knill says he is "delighted" to finally get his first win in charge of the club.

The Gulls' was their first victory since beating Exeter at the end of January, and their first win at home since 1 December.

"I'm delighted that it's here," Knill said. "There's been a lot of talk about us being better, but we had to win.

"The second half wasn't pretty but we had those three points and never let them go."

But before Tuesday's win, the former Bury and Scunthorpe boss had guided the Gulls to three losses and three defeats - but he is now unbeaten in his last three matches.

And Knill says the where Torquay salvaged a point at Dagenham after playing 85 minutes with 10 men and coming from behind to draw 1-1 at Southend, were the catalyst for the victory over Chesterfield.

"Those two performances really caused this," Knill told BBC Radio Devon. "We went into the game thinking we can win.

"It has taken a little bit of time and usually it comes with a bit of belief.

"Going down to 10 men at Dagenham, everybody pulled together. Then we do exactly the same, go and play Southend, no-one fancied us and we come away with a result."

The win ended a miserable run of one win in 18 games which has seen a side who were comfortably mid-table and looking at a play-off push dropping to one spot outside the relegation places.

The latest win puts the Gulls two points clear of the drop zone with three teams between them and York in 21st place.

"We're committed to staying in this league," Knill said. "The prize is massive and in the team are League players, so you want to keep performing in the League.

"We're going the right way about it, but it's a long way to go."