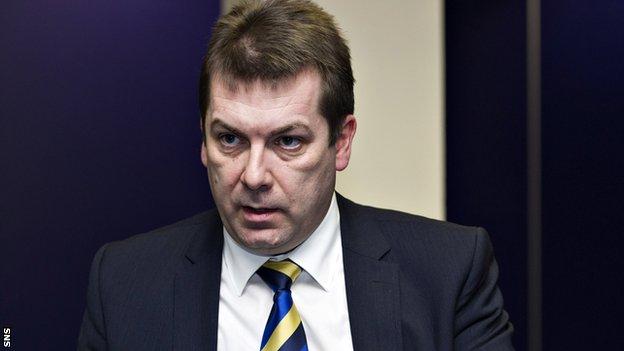 The prospect of Celtic and Rangers fielding so-called 'colt teams' in the lower leagues of Scottish football now seems unlikely.

This comes after a league restructuring meeting between the Scottish Premier League and the Scottish Football League took place on Tuesday.

The proposals put forward by the SFL chief executive David Longmuir last week were not discussed.

Meanwhile, Dundee interim manager John Brown believes the best way for the top clubs to blood their promising young talent is to loan them to other SPL clubs.

The Dens Park club currently have Scotland Under-21 defender Lewis Toshney on loan from Celtic.

"The Old Firm should be looking at their better players and putting them out on loan to the SPL sides and the First Division sides.

"They need to get games and experience with and against senior players, that's the only way you can bring them on.

"You need to push your quality players, because Toshney playing in the Second or Third Division wouldn't be in the Scotland under-21 squad.

"He's making mistakes but he's learning and he's rectifying these mistakes and taking that into the Scotland Under-21s."

And Brown thinks Wigan's Irish international James McCarthy is an excellent example of a young player who benefited from SPL exposure.

He added: "He played 140-odd games for Hamilton Accies, started when he was 16, he's a fantastic player.

"He's now got 200 games under his belt and he's only 22. The experience he's picked up is invaluable."