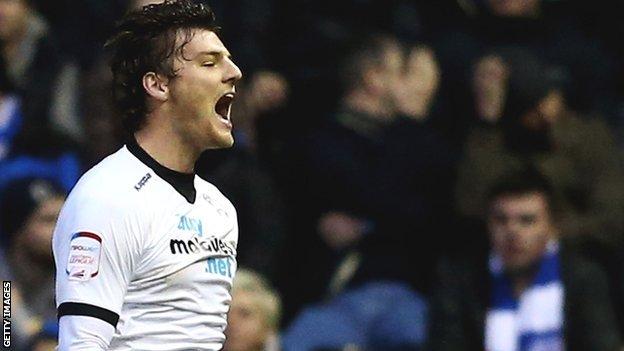 The 24-year-old striker joined on a one-month deal in February and scored his first goal in the impressive 2-1 win over Leicester City on Saturday.

Rams manager Nigel Clough says Martin has been a "calming influence" and has done well while at Pride Park.

It was a relief to score, but I have been pleased with my performances

"We are trying to keep Chris and I think he wants to stay," Clough said.

Derby return to Championship action after the international break with a home game against Bristol City on 29 March.

But although Martin's stint is scheduled to expire before then, he is already focusing on the possibility of featuring in that match.

Martin, who has played five games while with Derby, added: "It was a relief to score [against Leicester], but I have been pleased with my performances and the chances that have been created for me.

"We have a bit of time to rest and hopefully I can pick off where I left off in a couple of weeks. I need to make sure I come back fresh and firing for Bristol City."