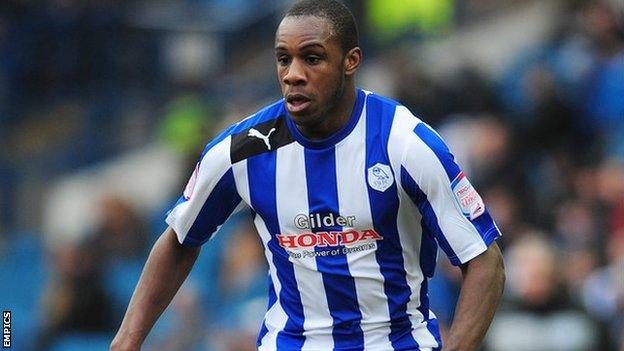 Sheffield Wednesday forward Michail Antonio has been ruled out for the rest of the season with a groin injury.

The 22-year-old, who is the club's top scorer this season with nine goals, suffered the injury in Saturday's 2-0 defeat by Cardiff City.

Wednesday boss Dave Jones told BBC Radio Sheffield: "He's upset, but the priority now is to get him back fit and running again.

"We just need to get him fit for the start of pre-season now."

He continued: "He was in a lot of pain, but that has subsided now and we have to move on. It happens in football.

"There are three or four people in the club who can stake a claim for his place."

As well as looking to replace the former Reading man from within, the Owls boss may now turn his attentions to the loan market.

"We're looking at the loan market, we've been keeping an eye on it all along," said Jones.

"We'll see if there's someone we can bring in and if there isn't then we will go with what we've got.

"Sunderland pulled Connor back because they had some injuries and once a player goes back to their parent club we move on. If he becomes available again then we'd be in there with everyone else."

Wednesday are currently one point above the Championship relegation zone and face local rivals and fellow strugglers Barnsley after the international break.