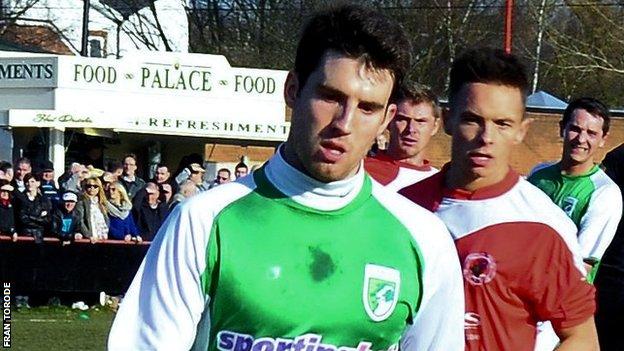 The win moves Guernsey up to sixth in the Combined Counties Premier Division.

Allen hit goal number 99 after 19 minutes and it was 2-0 up at half-time thanks to an own goal.

Epsom pulled one back early in the second half before Allen hit goal 100, Nigel Hutton and Dominic Heaume then made 5-1 before a late consolation.

"I'm pleased with the result because of the fact that 48 hours after playing at home they came out and gave a good performance," assistant manager Colin Fallaize told BBC Guernsey.

Fallaize, who was in charge of the side after manager Tony Vance contracted a virus and was forced to miss the match, was quick to praise Allen's team-mates after he reached his century of goals.

"It's something that Ross can put to bed now and put behind him, and we can motivate him and support him to go to the next 100."