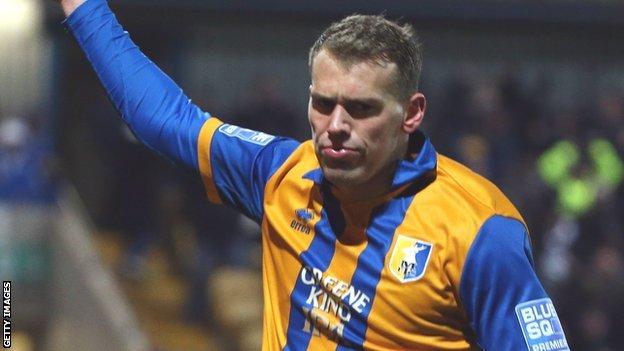 The Stags dominated throughout as Luke Jones hit the bar, while Matt Green struck the post from close range and was twice denied one-on-one.

Green had a penalty saved by Lee Burge after the break after Gavin Cowan fouled Matt Rhead, while Adam Walker went close for Nuneaton.

Mansfield still have three games in hand at the top of the table on Kidderminster, but Nuneaton are now two points adrift of safety in 21st position.

Green was at the heart of everything Mansfield did and should have added to his 18-goal total throughout the game.

The 26-year-old hit the post from a yard out and then put the follow-up wide. Burge saved from Green on the breakaway and Delroy Gordon put in a last-ditch tackle to deny the striker minutes later.

Stags boss Paul Cox made two substitutions after the break and his changes both made impacts within five minutes.

Rhead had only been on the field two minutes when he was felled by Cowan in the box, but Burge dived low to his right to deny Green from the spot.

Fellow sub Briscoe then fired his free-kick low to the keeper's right, via the aid of a deflection, as the Stags got the goal their dominance deserved.

Nuneaton created little but Adam Walker saw his goal-bound shot saved by Alan Marriott, while Green had a header disallowed for offside as Mansfield pressed for a second.

"We created that many chances and we found a goalkeeper in inspired form.

"We found a team that wanted to block everything and throw their bodies on the line. You can tell why Nuneaton have had some good results.

"It was one of those nights where I thought the ball wasn't go in the back of the net. Their keeper made some great saves - the one from the penalty was out of this world.

"It was a big result for us. We looked fit in terms of our physical fitness but our mental sharpness was a little bit off key."