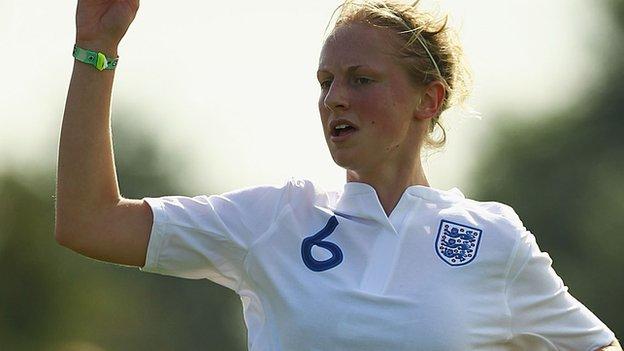 Uncapped Birmingham defender Kerys Harrop has been called up to England's senior squad for the first time.

Blues team-mate Jade Moore is recalled to the squad along with Chelsea's Claire Rafferty and Carly Telford for the friendly with Canada at Rotherham's New York Stadium on Sunday, 7 April.

But Birmingham's Karen Carney is ruled out with an ankle ligament injury.

Coach Hope Powell said: "Kerys has done well with the under-23s and we have been monitoring her for a while."

Harrop, 22, was a part of the Birmingham side that won their first FA Women's Cup last season and was a member of the England squad that won the European Women's U19 Championship in 2009.

Powell added: "(Kerys) was with the under-23s in La Manga last year and I asked her to take part in a training session with the seniors and she did okay so this is another opportunity for me to have a look at her.

"The team are doing well at the moment so it will give me a chance to see how she and Gemma cope in this environment."

England beat Canada 1-0 to win the Cyprus Cup and Powell believes it is the perfect fixture ahead of Euro 2013 in Sweden this summer.

"We have to find a consistency before the Euros and so playing Canada again so soon makes it the ideal challenge, one we are all looking forward to," she said.