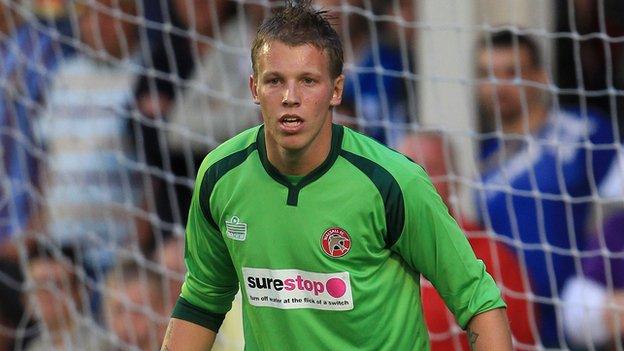 Walsall have parted company with their second goalkeeper in six weeks by releasing David Grof from his contract.

Hungarian Grof, 23, who started this term as the Saddlers' first-choice, has undergone a medical at Clermont as part of a trial at the French Ligue 2 club.

"A fresh start in a different country will give him an opportunity to address his issues both on and off the field," said Saddlers boss Dean Smith.

"David began the season as number one, but a loss of form and confidence saw him lose his place in the team. We wish him well and hope he takes the opportunity presented to him."

Like Walker, who he was signed to understudy from Mansfield Town two summers ago, Grof has found himself ousted by a succession of loan keepers.

Karl Darlow, who has since returned to Nottingham Forest to become first-choice at the City Ground, Wolves' Aaron McCarey and MK Dons' Ian McLoughlin have all been picked ahead of him.

And, when Walsall decided not to extend McLoughlin's loan last month, rather than recall Grof, they persuaded McCarey to return for a second spell from Wolves.

Grof, who has not even been on the bench for the last two games, made the last of his 39 Walsall appearances in the 3-2 FA Cup first round replay defeat by Lincoln City in November.