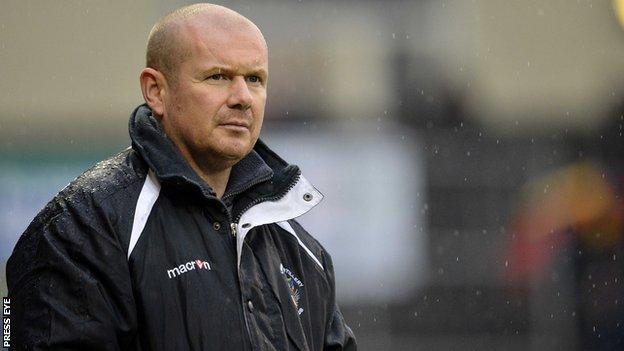 Tim McCann says his Lisburn Distillery still have time to dig themselves out of relegation trouble despite being eight points adrift at the bottom.

The Whites, who have two games in hand on one-from-bottom Donegal Celtic, meet Portadown in a rearranged Premiership fixtures on Tuesday night.

"I genuine believe we will get out of this," said manager McCann.

"We will play all the teams in the bottom half and, with the two games in hand, it is in our own hands."

Portadown's hopes of making a late surge for a top six finish were dashed by Saturday's 0-0 draw at home to Ballymena.

"We needed to win that one, but we have not been good enough," said Ports midfielder Neil McCafferty.

"Lisburn Distillery are struggling and will be battling and fighting for their lives."

In Tuesday's other Premiership game Glentoran, unbeaten in their last six league games, play Dungannon Swifts at the Oval.