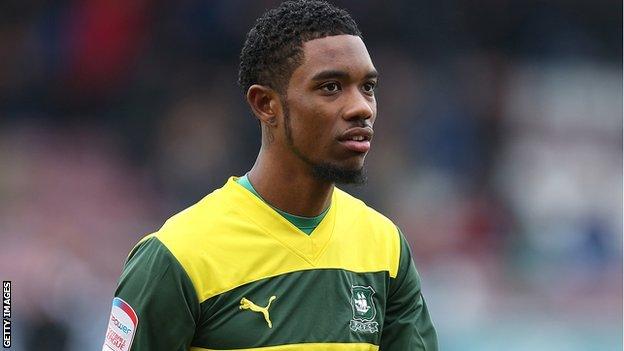 Plymouth Argyle manager John Sheridan says winger Jason Banton can get even better after scoring his fifth goal in nine games on Saturday.

The 20-year-old, who is scored as Argyle beat to climb out of the League Two relegation zone.

"I think we can get more out of him," Sheridan told BBC Radio Devon.

"I think he's one of those that because he's scored five goals he might think he's doing his job."

Sheridan added: "But I'm going to keep on his case because to be a good player he's got to be non-stop all game and not give silly little things and cheap balls away.

"If he gets that into his game he can play at a higher level."

The win put Argyle on 40 points, joining a group of four other teams on the same total at the bottom of League Two..

"It's massive and the most important thing is getting the three points," Sheridan said of the victory, which was only Argyle's second in the space of a month.

"We worked our socks off and Fleetwood are a good team who are going for the play-offs.

"The only disappointing thing is when you're winning the game 2-0 we shouldn't have made it as hard as we did.

"We should be controlling the game when we're 2-0 up and this is something I've got to try and get into them."