The main talking point from an eventful game at the DW Stadium was Callum McManaman's tackle on Massadio Haidara, so I am going to start by trying to explain what goes through a player's mind when you go into a challenge like that.

As far as Wigan's tactics in their latest bid for Premier League survival are concerned, we saw some good examples of the pros and cons of their 3-4-3 formation and passing style.

It can be great to watch but is risky too and it was also evident why, when the Latics have enjoyed more possession in games this season, they have not used it to create more chances or score more goals.

TACKLING AND THE POINT OF NO RETURN

First things first, it was an awful challenge by Callum McManaman that deserves some retrospective punishment.

I expect it will be followed up but the calls for him to get a five, six, or seven-game ban are nonsense. It is a red-card tackle that the referee has missed so it should be a three-game suspension.

There is a point when it is a bit like a plane taking off, because when you go past the point of no return there is no turning back. And you know the outcome can be nasty

McManaman will learn from it and that should be the end of it - at the moment I feel a bit sorry for him, although clearly I wish the young boy Haidara well too and hopefully he is not badly injured.

But, speaking as someone who made my living out of tackling, I understand how it happened.

I know that as soon as McManaman committed himself to that challenge then there was no way he could pull out of it.

You sometimes have a split-second to decide whether to make a tackle and, if it was for a 50-50 ball like that one, then in my mind I would be thinking if anyone's getting hurt here, then it's not me. Most of the time, the other player is thinking the same.

So I would go in as hard as I could to protect myself but my aims were always to win the ball and not get hurt. If you pull out, or go in tentatively, then it is you who gets hurt.

It is a bit like a plane taking off, because there is a point of no return. Once you are past that, you know that if you have got it wrong then the outcome can be nasty.

With the speed of players these days, the pace of the game and the force of tackles then, when people go in full-blooded and commit themselves like McManaman did there is a high risk of someone getting hurt.

But that does not mean there was any intent by him to injure his opponent.

McManaman is getting plenty of stick at the moment and I know what it is like to be accused of being a dirty player.

If myself, Joey Barton, Ryan Shawcross or Lee Cattermole or anyone else with a reputation for tackling had made that challenge, then there would have been people saying 'throw the book at them, they are a disgrace'.

If it had been a creative midfielder or someone who is not known for getting stuck in then the first thing people say is 'he's not like that'.

That winds me up. Believe me when I say that any professional with a winning mentality who is taking part in a competitive game will have a tackle like McManaman's in them.

WIGAN: GOOD TO WATCH BUT ALSO NICE TO PLAY AGAINST

There was more controversy with Arouna Kone's winner, which came after Maynor Figueroa flicked on a corner with his hand.

The Latics ended up with the three points but you can see why they are struggling and why they have conceded so many goals. The Latics have conceded 56 in the league this season and only Reading, with 57, have let in more.

Wigan boss Roberto Martinez uses a 3-4-3 formation but, within that framework, he is happy to give all his players plenty of freedom going forward when they want to.

Even his three defenders have a licence to join in midfield - there was one occasion in the first half when Paul Scharner raced forward and played a one-two with Emmerson Boyce.

Jean Beausejour is a wing-back in their formation but you can see from the graphic below showing his touches that he was essentially playing as the third attacker, with Shaun Maloney often dropping deeper. Beausejour did not touch the ball in his own area once. 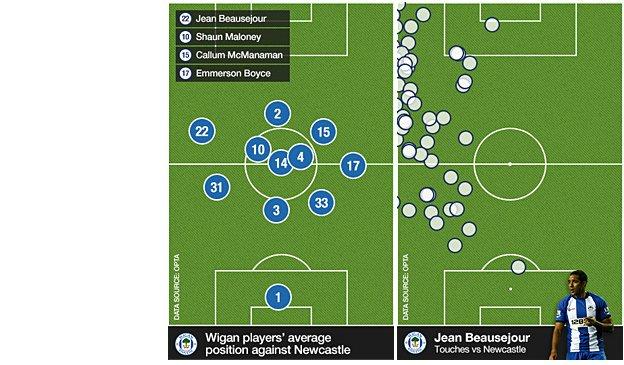 Wigan's first goal showed how effective it can be to have three up front and genuine width. McManaman's cross missed Kone in the centre but Beausejour arrived from the left at the back post to score.

But Newcastle's equaliser demonstrated what happens when you have pushed your wide man forward and you lose possession. Wigan gave the ball away on the halfway line and there was no-one tracking the run of Davide Santon on Beausejour's flank when he arrived in the Latics area to score.

You have to be brave to play the way Wigan do because you leave big gaps for the opposition to exploit, especially between the back three of Figueroa, Antolin Alcaraz and Paul Scharner, who have a lot of ground to cover. Newcastle's attacking players were in all sorts of space for their goal.

Wigan's problem is that, although they are a top-eight team in terms of passing and possession, they do not score a lot of goals. That is not down to their formation - more their individual players, and the quality of their final ball.

But their set-up means they struggle when they do not have the ball and, because they take a lot of risks, they give it away in dangerous positions. Again, with Newcastle's goal, they paid the price for trying to play too much.

It is a recurring theme for them this season. In Wigan's 29 league games, there have only been seven games where teams have enjoyed more possession than them [including, marginally, Newcastle at home on Sunday (50.22%) and away in December (50.15%), when the Latics lost 3-0].

But what was clear to me from watching them against the Magpies is that you can let Wigan have as much of the ball as they want and still beat them.

Martinez wants them to play the way they do, and all his players are good in possession, but sometimes they pick the wrong pass and get punished.

TACTICS NOT THE ONLY DECISIONS TO CHANGE MATCHES

I have never seen so many poor calls in one weekend. They were all clear-cut too

In the last few weeks I have talked about tactical switches which affect results, like Rafa Benitez's substitutions for Chelsea against Manchester United.

This weekend was a reminder of how officials can change matches too.

I could easily have written an entire column about refereeing decisions from the last couple of days and I have never seen so many poor calls in one weekend. They were all clear-cut too.

And, as much as Wigan's attacking approach helped get them a win against Newcastle, in the end they only got the three points because of a handball by Figueroa that was so obvious that you did not need the benefit of TV replays to spot it.

It could make a big difference to Wigan and the other sides in the relegation scrap because Sunday's win was a massive one for them.