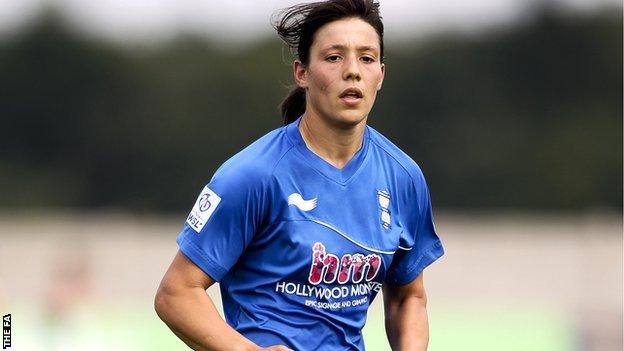 International team-mate and namesake Fara also scored three on her Liverpool debut in a 5-0 win over Aston Villa.

Arsenal's tip to Nottingham Forest and Everton's tie at Oxford were postponed.

In the two ties not involving WSL teams, Premier League high-flyers Sunderland and Leeds United both reached the last eight.

The Cup holders won comfortably enough in the end, but they did not have it all their own way against their Premier League hosts.

Williams headed in the 18th-minute opener, but Cardiff equalised through a superb 25-yard strike by midfielder Paige Stewart nine minutes before half-time.

Williams restored the visitors' lead with another header in the 54th minute.

But it then took the WSL team until nine minutes from time to wrap up the victory when the striker completed her hat-trick with a close range shot.

Lincoln edged a hard-fought tie and deserved their narrow victory.

Precious Hamilton and Carla Cantrell both went close in the first half.

And it was a 57th-minute Cantrell corner that led to England winger Jess Clarke heading the only goal of the game.

Cantrell then had a shot tipped on to the bar by goalkeeper Nicola Davies as the home side looked for a decisive second.

But four minutes from time they had to thank goalkeeper Karen Bardsley for preventing an equaliser with a block from England team-mate Eni Aluko.

It was the Fara Williams show as Liverpool swept aside Premier League side Villa.

The England midfielder, signed from Merseyside rivals Everton in the close season, struck home from 25 yards after just eight minutes.

A 34th-minute Louise Fors penalty doubled the lead, and five minutes later Williams almost scored again with a lob that hit the bar.

But another chip, in the 57th minute, brought the midfielder her second goal.

Striker Natasha Dowie, like Williams a close season signing from Everton, slid in the fourth after 74 minutes.

And 13 minutes from time Williams raced clear to complete her hat-trick.

And the visitors almost doubled their lead when Spanish striker Laura del Rio hit the bar five minutes before the interval.

Striker Ann-Marie Heatherson forced in what proved to be the 55th-minute clincher when goalkeeper Nicola Hobbs dropped the ball at her feet.

Sunderland striker Sophie Williams played a key role in her team's victory like her namesakes at Birmingham and Liverpool.

She crossed for strike partner Beth Mead to head the opener after 33 minutes.

And in the 53rd minute, she crossed again for Mead to score her second with a simple tap-in.

Captain Steph Bannon completed the scoring with a 56th-minute header.

Striker Carey Huegett gave the home side a sixth-minute lead that was doubled 10 minutes later by defender Emma Lipman.

A 68th-minute Huegett penalty effectively put the game beyond Yeovil.

And 14 minutes from time, defender Hayley Sharp finished off the visitors with the fourth.