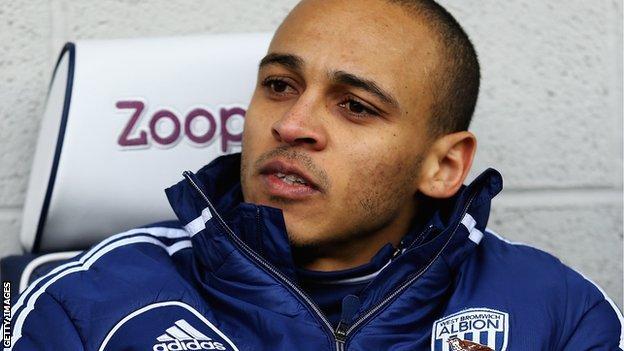 West Brom striker Peter Odemwingie has criticised the club on Twitter after a string of substitute appearances.

The 31-year-old has not started a game since attempting to move to QPR on transfer deadline day, 31 January, without West Brom's permission.

"Keeping me on the bench now is worst [sic] than what they did on the 31st," the Nigeria international tweeted.

Told later by a fan on Twitter that he should be sacked, Odemwingie replied: "That's my wish."

The former Lille and Lokomotiv Moscow striker has scored 30 times in 84 Premier League appearances, including a hat-trick against Albion's rivals Wolves

In a stream of Twitter outbursts on Sunday, the Nigeria international, who joined Albion in 2010, added: "If they like they shouldn't even give me 10 mins to play. Threatening to ruin my career? Career I closed already last summer? No harm to me.

"Want to treat me like an average player. The abuse and praise I get is it average? So get some extra from me too."

Odemwingie arrived at Loftus Road at the end of January in attempt to engineer a move, despite West Brom saying that no fee had been agreed and he was not free to discuss personal terms.

Odemwingie reported to training the day after his unauthorised trip to west London, but was told to return the following week and was subsequently fined two weeks' wages.

In February, manager Steve Clarke insisted the forward still had a part to play this season.

But Odemwingie has been used as a second-half substitute on four occasions since the controversial incident including an appearance in the 68th minute in the goalless draw at Stoke on Saturday.

Odemwingie, who has scored five Premier League goals this season, has another season left on his contract after the end of the present campaign.