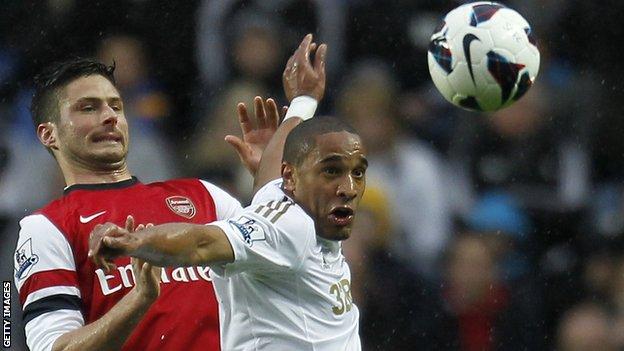 Swansea City captain Ashley Williams has urged his team-mates to find the self-motivation to avoid ruining what has been a "brilliant" season so far.

A 2-0 home defeat to Arsenal on Saturday saw Swansea lose two in a row for only the second time this term.

Williams, 28, said his side showed "no intensity, no tempo, no urgency" as the Gunners claimed the three points.

"I can't imagine that they are but it's important for us [to win] as much as anybody else."

Nacho Monreal and Gervinho scored in the second-half as Arsenal became only the third team to win at the Liberty Stadium in this season's Premier League, joining Everton and Norwich City.

It followed last Saturday's 2-1 loss at West Brom, consigning Swansea to successive defeats for the first time since September.

"I don't think we played very well," added Williams. "It was the same as last week, maybe even worse. It's disappointing to lose 2-0 at home.

"It was flat. No intensity or tempo. I'm not too sure why. I'd never question the lack of effort, there was just no intensity, no tempo, no urgency. In the second half we never looked like scoring."

There have been few lows in Swansea's first season under Michael Laudrup.

Victory over Bradford City gave the club their first major trophy in English football, and with it a place in next season's Europa League.

They are also well clear of any relegation trouble, sitting 16 points above the bottom three with eight games remaining.

Swansea failed to register a shot on target in a home league game for the first time since they were promoted to the Premier League.

But Williams rejected suggestions that other teams have more to play for and stressed the importance of fighting until the final whistle of the season.

"We've had a brilliant season up to now and it would be a shame to ruin it," said the centre-back, who will now turn his attention to a World Cup qualifying double header with Wales against Scotland on 22 March and Croatia four days later.

"We've lost two on the trot, last season we lost four on the trot in a spell and didn't finish the season well.

"There's no time to feel sorry for ourselves. We need points in the next game."