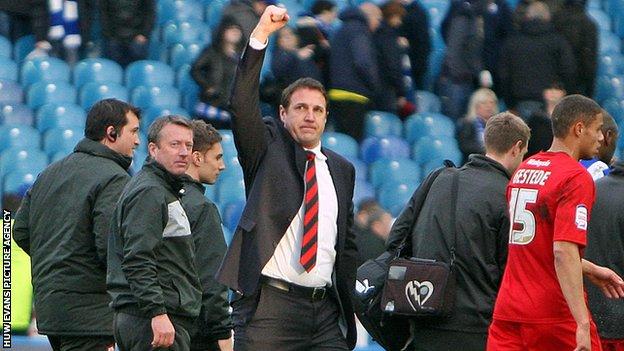 Cardiff City manager Malky Mackay hailed his makeshift back four that helped open a seven-point lead at the top of the Championship with a 2-0 win at Sheffield Wednesday.

"We had a back four that had not played together," said Mackay.

"Leon [Barnett], who has come in and met the guys for one day, put in a wonderful performance.

"Young Ben Nugent, who's 19, was thrown in there for his 10th [league] game and they keep a clean sheet.

"We've kept seven clean sheets away this season away from home, which is huge.

"And that was our 14th clean sheet of the season on a day where we've dealt with the aerial threat of the way Sheffield [Wednesday] play."

Turner is expected to be fit to return from an ankle injury for Cardiff's next game at Peterborough following the two-week international break.

The diagnosis is not so positive for captain Hudson, though, who could need surgery on his ankle problem.

"We're going to have to discuss whether that's the case or not," added Mackay.

"But it means we're talking more than an couple of weeks out."

Don Cowie and Matthew Connolly scored the goals - both from set-pieces - to give Cardiff a first victory in four games.

Midfielder Cowie found the net on the stroke of half time for only the second time this season in only his second start in the last 14 games.

"He's a top professional and that's why he'll have a long career," said Mackay.

"He's trained really hard, backed everybody and been there ready to come on and be involved in everything.

"That's why I bought him in the first place. I want good people and good professionals around me. He's a top professional and a top player as well."

Cardiff's victory - their 10th on the road this season- coincided with defeats for the two of their nearest rivals.

Hull City lost at home to Nottingham Forest, while Watford fell at Barnsley.

Cardiff's stuttering form had sparked suggestion that the leaders were losing their nerve as the race for the title and Premier League promotion reached its climax.

Mackay, though, stressed there had never been any semblance of panic or nerves among his players.

He said: "They've always been calm in the training ground.

"Anyone who visits that place will see the calmness at the training ground and the focus we've got on the next team we play against.