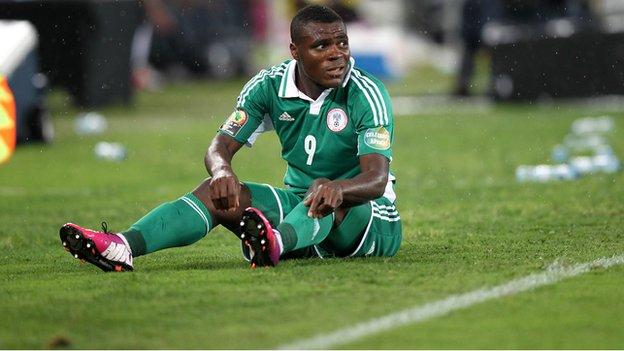 The Spartak Moscow striker is nursing a long-term hamstring injury which he suffered during the Africa Cup of Nations in South Africa.

He scored four goals to emerge as top scorer at the tournament which the Super Eagles went on to win.

Emenike has told BBC Sport he feels neglected and abandoned by officials.

The coach has been trying to reach him

"I do not expect to be pampered like a baby but you get the feeling some people only care about themselves," Emenike said.

"The coach has really let me down to be honest. He [Stephen Keshi] never even bothered to check up on me since the injury in South Africa.

"Just a call is all it takes, instead my club have been very supportive for over a month. They have shown they value my fitness and overall health.

"Even the Nigerian officials [NFF] refused to find out information concerning my state of health. It's a big shame and a complete sign of neglect on their part."

"It's disappointing and totally absurd to hear him say that when he has since changed his mobile number," Alaiya insisted.

"The coach has been trying to reach him. Luckily the team secretary was always in touch with him on a regular basis.

I am a forgotten man

"We expect more from him as a professional player but statements like that are unacceptable.

Emenike quickly denied he was unreachable.

"I was in Spain for three weeks. No word. I got back to Russia, still no word. Yet, they know how to reach me when and if they need me to play for the country.

"The coach was always in touch before the Nations Cup. Now that is over, I am a forgotten man.

"There's a long list of players that suffered from similar treatment, so I can understand that nothing has changed back home.

"The mentality has got to change and Super Eagles players must not be abandoned when they suffer injury while representing their country.

"I am only speaking out now because they think everything is all about money.

"Just a telephone call to show you care could go a long way to motivating someone at a difficult time."

The Russia-based striker, who was expectedly left out of the country's squad for this month's World Cup qualifier against Kenya, is hoping to return to action in late April.