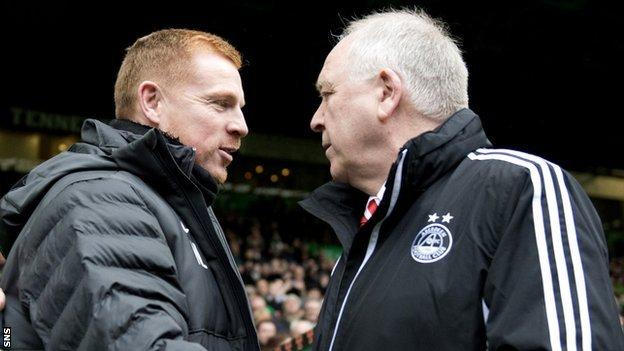 The Dons were winning 3-1 with 20 minutes left, but the home side triumphed 4-3.

"You can't condone that kind of defending at the end, that's just unacceptable," Brown said.

"There was an aerial bombardment and Celtic are a powerful side, but we should have been able to cope with that and unfortunately we didn't."

But former Don Charlie Mulgrew scored a goal which deflected in off Russell Anderson, then Gary Hooper scrambled in from a corner and Georgios Samaras won the game in style for Celtic with an injury time overhead-kick.

"We gave the ball away in midfield for the third and fourth goals when we should have been putting Celtic on the defensive," said Brown

"We'd a good opportunity to break on the counter attack because they were committed forward."

Aberdeen have not beaten Celtic at Parkhead in the Scottish Premier League since April 2004.

"I've been involved in many games, as people keep telling me," continued Brown.

"But I don't think I've been involved in a game like that where we were down after 12 seconds and fought back.

"We've shown a lot of character, a lot of determination and got into what should have been an unassailable lead. We knew Celtic would put a lot of pressure on us towards the end but I didn't envisage losing the goals as softly as we did."

The Dons face Hearts and Dundee United in their final two games before the split, and Brown says recent performances show they are capable of making the top six.

"I was guessing with 17 minutes to go we were comfortable in the top six again with a couple of games left, but now we've got it all to do again.

"It's two difficult fixtures to come which we're capable of winning, but it's made it very difficult for us. Even a draw would have given us more heart to go into the final two games."

"I tell you, there's a spirit in the dressing room. They're shattered, they're down, but I've seen earlier in the season and throughout the season there's a resilience, and I'll be very surprised and disappointed if we don't come back with a bang next week."