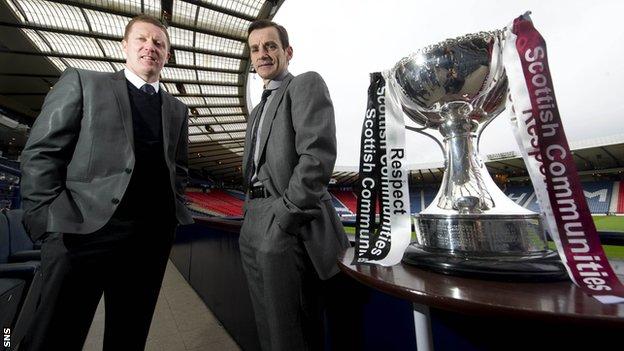 Gary Locke and Danny Lennon are under no illusions over how much a League Cup final win would mean to their clubs.

New Hearts manager Locke and Buddies boss Lennon will instruct from the sidelines at the Hampden showpiece.

It's who handles the occasion best on the day

"Sunday will show you just how big a club Hearts is when you see how big a support we'll have there," said Locke.

And Lennon added: "My message to the players is to grasp it and make it a memorable occasion that'll live with you for the rest of your life."

Locke was placed in interim charge of the Hearts first team a matter of weeks ago, having served as coach under the previous three managers.

Hearts confirmed on Saturday that Locke has been appointed manager until the end of next season.

And, as he prepares for a cup final in only his fourth game in charge, the 37-year-old took time to acknowledge his predecessor's contribution.

"It means the world to me but let's not forget there's one man who's got us to this final - John McGlynn," Locke said.

"If we can win on Sunday it's all very much for him.

"It's such a big occasion and all the players are training well. We're trying to just prepare exactly the same as what we did in the Scottish Cup final last year [the 5-1 win against Hibernian."

As a player, Locke started Hearts' Scottish Cup final defeat by Rangers in 1996 and was still with the club two years later when they beat the Ibrox club, though he did not play.

And he hopes to pass on what he has learned to a side that contains several players still in their teens.

"You've got to enjoy the occasion and you'll certainly enjoy it more if you can manage to win it.

"The games against St Mirren this season have been very close. They've won two and we've won one, so there's not a great deal between the sides.

For some players this might be their only cup final

"It's who handles the occasion best on the day."

Meanwhile, Lennon wants his players to reproduce what he believes they do best when they come up against Hearts.

"The team that'll earn the right to lift that cup on Sunday will be the team that works the hardest and brings their true qualities to the game," he said.

"Our true qualities are our work-rate and belief and if we can bring those two things together throughout the 90 minutes that's going to be paramount."

St Mirren, who beat Celtic at the semi-final stage, have not won a major domestic trophy since 1987.

"At the beginning of the competition, I don't think a lot of people would've matched Hearts and St Mirren for the final," Lennon added.

"We went up to a difficult place, Aberdeen, in the quarter-final and a lot of people had written us off for that game and we came out winners.

"It came to the semi-final and no-one gave us a chance, but we gave our utmost best that day and we must bring qualities on Sunday.

"For some players this might be their only cup final."