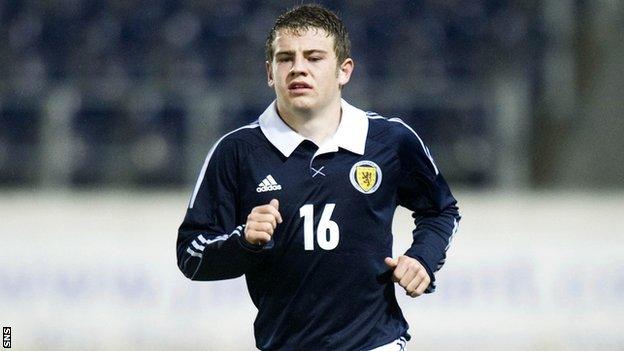 Ryan Fraser is a man on a mission. The 19-year-old has recently been called up to the Scotland Under-21 squad and is already dreaming of a life in England's Championship.

Currently at Bournemouth - whom he joined in January after deciding against extending his contract with Aberdeen - the youngster is loving life on the Dorset coastline.

But it hasn't been an easy transition for him. Tipped for the top as one of the most talented youngsters at Pittodrie, he was the subject of much derision for his choice to join the League One club.

Some fans berated him for casting aside his allegiances to Aberdeen, whose manager Craig Brown felt the winger would have benefited from gaining more experience in the Scottish Premier League.

However, Fraser insists there was never any bad blood between himself and the Dons over his move South.

"They tried hard to keep me," he explains. "I went to [chairman] Stewart Milne's house and he was really nice to me. He spoke to me about football and my decision, everybody tried to make me stay.

"The gaffer and [assistant] Archie [Knox] had meetings with me too, really trying to keep me, which was nice, but there was always only going to be one decision.

"Once I went down to Bournemouth and met manager Eddie Howe, it was my first decision to go there.

"I loved every second of it. The club were on a 16-match unbeaten run and climbing the league and the training facilities are right beside the stadium, which really helps.

"At Aberdeen we were training on cricket pitches beside the beach, which I didn't mind at the time, but in Bournemouth they're really good, they've got everything.

Every player wants to be at the top, playing in the English Premier League

"You can do extra after training to improve yourself, which really appealed to me."

However, Fraser admits it hasn't been entirely easy since his mid-season transfer.

"It wasn't a good start," he says. "I tore my hip in my first training session, so I'm just starting to get back to full fitness now. It's coming along slowly but I'm sure I'll get there soon."

His impact at the club is still to be assessed - he's made five appearances for the Cherries since joining at the start of the year, none of them starts.

But he's confident things are looking up and is thrilled to have won a call-up to Billy Stark's Scotland Under-21 squad.

"I was looking on Twitter all day because I knew the team was getting announced," he says.

"When I noticed my name was on it I was absolutely delighted - so hopefully against Luxembourg I can maybe get on and help the team.

"When I get back to full fitness for Bournemouth, hopefully I can get a start, get a run in the team and see them get promoted.

"Every player wants to be at the top, playing in the English Premier League - you never know, in a couple of years we could be up there. I'm hoping to get to the Championship and then, as my career develops, hopefully I can get to the top."

In the meantime, Fraser is settling in nicely to life in Bournemouth. It's a far cry from his home city of Aberdeen but he believes his life is changing for the better.

So, would he ever want a return to the SPL? Not, it seems, any time soon.

"Maybe at the end of my career, because I'm loving it down here," he adds.