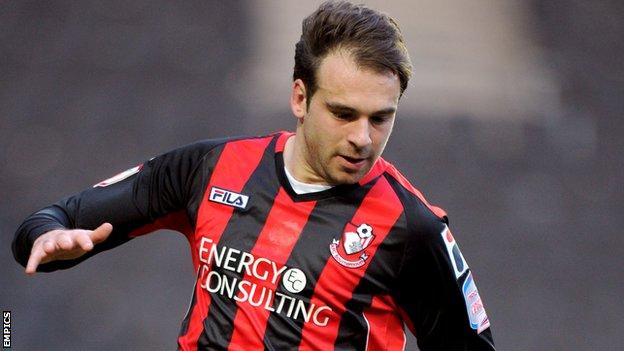 Brett Pitman scored for the third successive game as Bournemouth moved up to third in League One.

The Jerseyman opened the scoring before the visitors, who were only able to name four substitutes, drew level through Andy Bishop's header.

Matt Ritchie got his first goal since his January move from Swindon to restore the Cherries' lead as he fired home from the edge of the box.

The victory left Bournemouth level on points with second-placed Swindon and Brentford, in fourth, although the former, who were held at home by Notts County, have the advantage of a vastly superior goal difference.

"I thought [in the] first half, we were excellent. Saying that I've got to give credit to Bury, I thought they battled and they showed great spirit like we thought they would.

"They were a tough nut to crack - you could see from the bench, the limited resources at the moment. [But] They gave everything in their pursuit of trying to get points to stay up and certainly wish them well in that.

"The equaliser rocked us a little bit. Once we got the second goal, which I think was the big goal in the game, it was quite comfortable for us.

"We've got excellent creative players in the team and I think that's shown today by four different goalscorers."