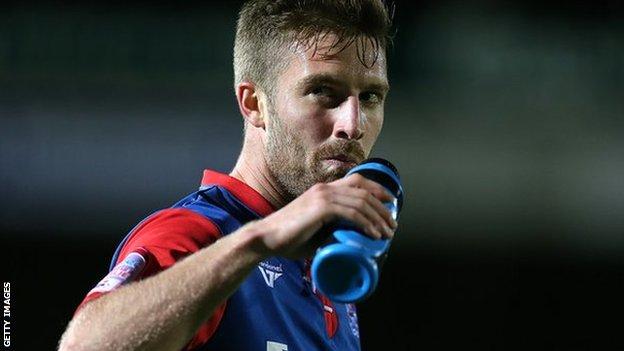 Matt Fish's superb strike helped Gillingham extend their lead at the top of League Two to eight points with a win over struggling Accrington.

Fish's pivotal goal came when he picked up the ball on the edge of the area and his left-footed drive crashed off the underside of the bar and into the net.

Gillingham should have extended their lead but Deon Burton, Danny Kedwell and Chris Whelpdale were all denied.

Francis Jeffers went closest for the visitors but his effort was well saved.

"We were absolutely fantastic first half, very tenacious, very composed in possession.

"We've seen in all the divisions anxiety can set in, and what the players showed was determination, courage, togetherness and unity to protect that goal.

"I wouldn't say we held on, but we defended resolutely, and you can see everyone has done their job for the club. You can tell from the reaction of the supporters it was a great victory.

"I've never seen Matt Fish kick it with his left foot before, but he nearly breaks the cross bar, in off the bar, unbelievable shot, went in like a missile, what a moment that was for him."