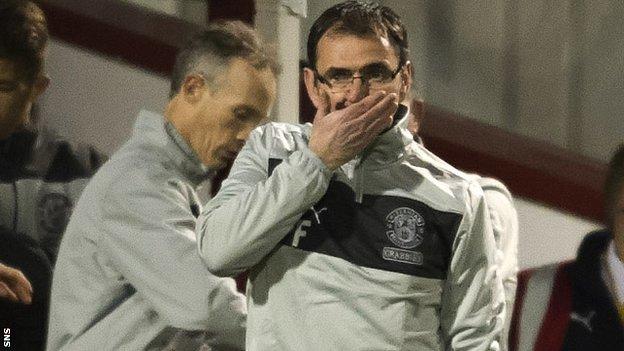 Hibernian manager Pat Fenlon was left fizzing at his side's second half capitulation at Fir Park.

Despite Hibs leading at half-time thanks to Tom Taiwo's diving header, Motherwell hit back with four goals after the break.

"It's very sore," Fenlon told BBC Scotland. "We got what we deserved tonight; we didn't deserve anything out of the game.

"We weren't pleased we conceded three goals within 15 minutes."

And Fenlon added: "If you concede one it's bad enough, but you've got to make sure you stay in the game and you don't concede one quickly.

"It's happened to us three or four times this season and it shouldn't happen."

Prior to Friday's defeat, Hibs had gone four games unbeaten.

They remain in sixth place in the Scottish Premier League but are only one point ahead of Dundee United, who have a game in hand.

"Our confidence should have been good coming into tonight, we hadn't been beaten in a long time," said Fenlon.

"Motherwell are a decent side, there's no doubt about that, but our performance wasn't good enough tonight."