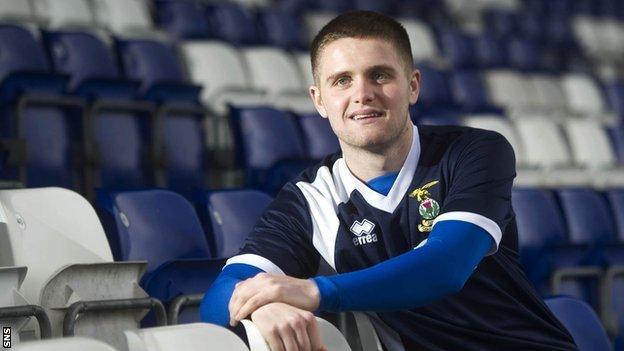 Danny Devine has committed his future to Inverness for a further two years after signing a contract extension.

Devine, who joined Inverness in January until the end of the season, told BBC Scotland that negotiations have been ongoing for a couple of weeks.

"I've really enjoyed it since I've been up here," he told BBC Scotland.

"The lads have been brilliant. We're doing really well in the league and I'm happy to get it all signed to concentrate on my football".

There are a couple of places up for grabs in Europe, but we're taking every game as it comes and trying to get as many points as we can

The Belfast-born player, now 20, began his career with Lisburn, before moves to Linfield and then Preston in 2009.

Devine then signed for Fleetwood but was released after a spell on emergency loan at Wrexham.

He has impressed since joining Inverness Caledonian Thistle, despite making just four appearances, and is now hoping to play a bigger part in the team in the seasons ahead.

"I would like to play every game, but coming up here, I knew it wasn't going to be easy," he said.

"The games I have played in I don't think I've done myself any harm. It's all about the team now, though, and getting as many points as possible on the board."

Caley Thistle have already guaranteed themselves a place in the top six of the Scottish Premier League after a 2-1 defeat of Ross County.

Devine said: "It was a massive win for us, as we are so close in the league. To get a win over our local rivals gives us a great boost. It's a great motivator to push on to finish above them and as high as possible.

"Finishing top six was the aim. There are a couple of places up for grabs in Europe, but we're taking every game as it comes and trying to get as many points as we can.

"I never imagined I could potentially be playing in Europe next season. If it was to come off, Inverness in Europe, it would be a big deal. But it's a long way away and we just have to wait and see".

"I've got to keep performing well and doing well when I get my chance. I'll do my best to repay the faith the manager and staff have shown in me."