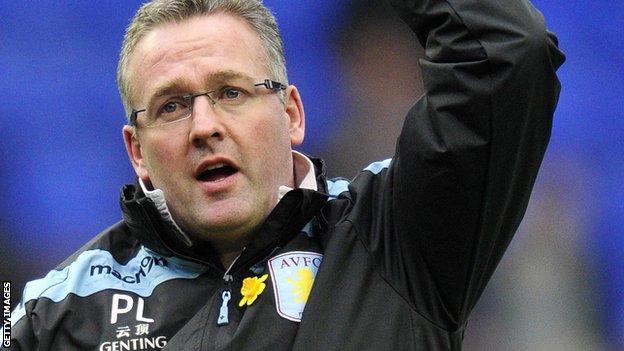 Paul Lambert says struggling Aston Villa should not be "unduly worried" and he has not considered relegation.

Villa are three points above the relegation zone ahead of Saturday's home game with the Premier League's bottom club Queens Park Rangers.

I've got belief we're going to be fine

But Villa boss Lambert insists he is looking up and not thinking about getting dragged into the bottom three.

"Other teams near the middle of the table could easily get sucked in," Lambert told BBC Sport.

Villa start the weekend sitting 17th in the league table, three points ahead of Wigan Athletic, who are directly below them.

However, Wigan have a game in hand while the Latics also boast a better goal difference than Villa.

"I've always been positive in my football and the way we've been playing lately I don't see why we should be unduly worried," added Lambert.

Aston Villa, who triumphed 2-1 at Reading last week, have not recorded back-to-back Premier League wins since May 2011 when they ended the season with a 1-0 victory over Liverpool after a 2-1 away success at Arsenal

"I don't talk about it [relegation], I just focus on the game ahead of us.

"We're in the mix with a lot of other teams but I've got belief we're going to be fine.

Having triumphed 2-1 at Reading last Saturday, Villa could pull six points clear of the relegation zone with victory over Queens Park Rangers.

But Harry Redknapp's side also go into the game with momentum following back-to-back wins over Southampton and Sunderland.

Lambert added: "There's still a long time to go after this game, so Saturday's result will not define anything."