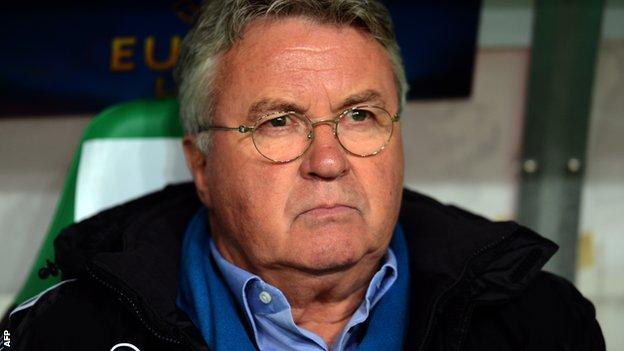 Anzhi Makhachkala head coach Guus Hiddink has insisted the Russian club will not be held to ransom or "pay stupid amounts of money" for players.

Six weeks ago he broke the club's transfer record to bring Willian to the Dynamo Stadium for £30m and the Brazil midfielder is not the first expensive outlay made by the Dagestan club.

Local billionaire and owner Suleyman Kerimov's previous purchases include Samuel Eto'o (£23.7m), Lacina Traore (£15.8m) and Polygus Gold. The latter is not an international striker, it is Russia's largest producer of the precious metal and Kerimov is owner of a significant stake.

Hiddink has been in charge of Anzhi for just over a year and he believes they have become a much more "professional" outfit in that time. With that in mind the Dutchman says they will no longer accept having to pay over the odds to convince clubs to sell to them, or pay over the odds to persuade players to come to Russia.

"When Anzhi comes now all the places say 'OK we double the price'. That's what we don't do any more," he told the BBC's World Football programme.

"The players are not saying 'Anzhi what is that? What should I do?' That's because in one year the club has become known and also we have a philosophy that we don't go into ridiculous amounts of money, although [the club] can afford it.

"Not just in Russia image-wise, but also in Europe, people take the club more seriously because the approach inside the club is serious."

Their Europa League exit to Newcastle on Thursday will come as a blow but a first appearance in the Champions League would certainly help to further sway opinion.

Anzhi are second in the Russian Premier League and despite a shock defeat by second-from-bottom Mordovia Saransk in their first game since the resumption of the domestic season, they are considered genuine title contenders.

A first-placed finish would guarantee a group stage spot in the continent's elite club competition, while finishing second would be enough to take them into a two-legged play-off for a group place.

Hiddink's side are in strong company though. They sit five points behind league leaders CSKA Moscow and three above reigning champions Zenit St Petersburg. Their rivals boast a joint-record three Russian Premier League titles since its inception in 2002.

But it is as much Anzhi's work off the pitch as on it that is turning them into the kind of club the Dutchman wants them to be.

"When we started a year ago it was chaotic within the team but I think the club has been transformed," he said.

"The new stadium is built, the academy is constructed. We have the aim to try to mix ourselves in with the Moscow clubs and also with Zenit.

"It's not just that there is money from an owner who doesn't think and just buys and buys - that's not the philosophy or the strategy. But of course we do still buy - you see Willian."

Hiddink describes his latest signing as "future orientated" but whether he will be there to see this forward thinking bear fruit is another matter. He confessed this week that he would consider returning to manage in England, although he has not ruled out remaining in his current job beyond the end of the season.

"If they show the ambition that they are showing and improve on all parts of the club then I don't know if I'll go," admitted Hiddink.

"Regarding other clubs, I'm 66 now and nearly 67 but as long as I feel energetic and I'm not becoming an old, bitter, sour man then I can go on.

"I try to reflect in my surroundings to see if I'm getting cynical. I can't predict where I'll be next season."

Many will already have put two and two together and concluded Hiddink will be back at Chelsea next year.

Hiddink won the FA Cup during his three-month stint with the west London club in 2009. He lost only one game, to Tottenham, and was within seconds of taking the club to the Champions League final before an injury-time Andres Iniesta goal at Stamford Bridge gave Barcelona victory on the away goals rule.

And while there is no way Hiddink will nail his colours to the Stamford Bridge mast - or any other - just yet, he did admit to being particularly proud of one achievement that not all his predecessors or successors under another big-spending Russian owner can boast.

"I'm the only manager who was not sacked I think," he joked.