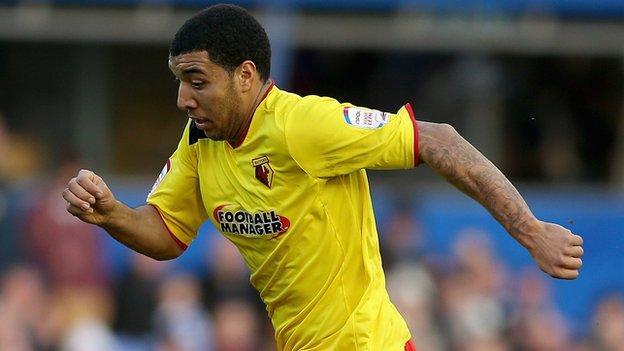 Watford striker Troy Deeney has admitted his spell in jail almost cost him his livelihood.

The 24-year-old was convicted of affray in June and

He told BBC Three Counties Radio: "I could've lost everything over a stupid mistake, which could've been avoided.

"I'm grateful that situation happened because it has made me realise what I need to do. I'm concentrating on hopefully getting us promoted."

The jail term meant he missed the first two months of the season and also raised doubts over his Watford future.

He believes his time in jail helped him focus on his football.

"I met some good people, some older guys with intelligence who have helped steer me in the right direction," he said.

"They told me I've got a very good career and to leave the nonsense alone. And that's what I think I've done since I've come out."

Deeney has formed a reliable strike partnership with Matej Vydra, with the pair notching 34 goals between them this season.

Vydra's tally of 20 overshadows Deeney's, but the Birmingham-born forward is happy with his overall contribution.

"But performance-wise I'm playing quite well now. I'm doing a lot more for the team in terms of holding it up and bringing others into play.

"As a complete all-round game it's going well but I know there's more to come."