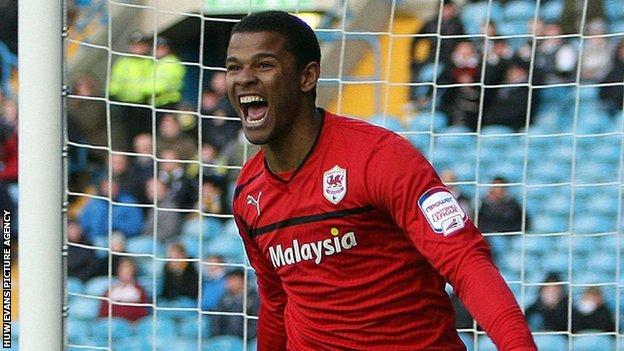 Fraizer Campbell says he does not mind if he doesn't score another goal this season as long as Cardiff City win promotion to the Premier League.

Campbell's five goals since joining from Sunderland on 21 January earned him the title of Championship player of the month for February.

But the England international does not feel there's pressure on him.

"As long as we finish first or second I couldn't care less if I didn't score another goal," he said.

"The goals are coming from all around the team, so I don't feel any pressure on me to score."

Campbell's five goals in February accounted for the Bluebirds' entire goal tally for the month.

But he hasn't scored so far in March, a month in which Cardiff have yet to win a match and have seen their lead at the top of the table cut to four points.

But the player is delighted with the start he's made since signing for a £650,000 fee from Sunderland.

"When you move you want to do well instantly just to show the rest of your team-mates and the rest of the fans what you're all about," he said.

"It was great that it started so well for me."

The Owls are 18 places and 29 points behind the Bluebirds, but Campbell claims that will have little bearing on the outcome.

"Sometimes you got into the game thinking 'these are down the bottom' but suddenly they're coming at you and you're thinking 'what's going on here'.

"But you've just got to treat every game as if it's a cup final and hopefully that will take us through to the end of the season and we'll win more than we lose.

"There's a game tomorrow and an international break then so we'll rest up, come back fresh and start winning some games."