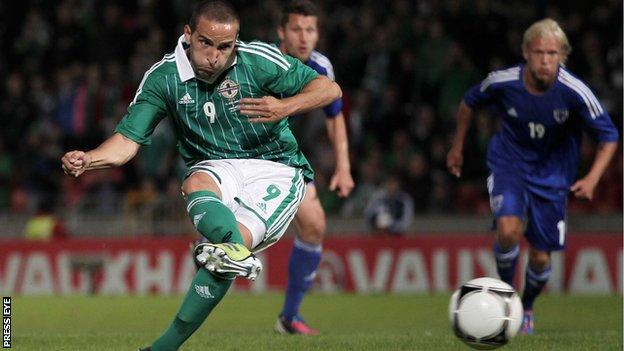 Martin Paterson has ended his absence from the Northern Ireland squad and is included for the World Cup qualifiers against Russia and Israel.

The Burnley striker had asked for time away from the international scene as he attempted to regain full fitness following a series of injuries.

Northern Ireland, with three points from four Group F fixtures, are at home to Russia on Friday, 22 March.

Israel are then the visitors at Windsor Park on Tuesday, 26 March.

Michael O'Neill is searching for his first win as Northern Ireland boss and has overseen three consecutive draws in World Cup qualification.

Russia are the only side to have beaten them, in the opening fixture, while they have yet to play Israel.

"Russia are are a top team, winning all four qualifiers without conceding a goal," said O'Neill.

"But it's a game where we have everything to gain - Russia will be strong favourites and that suits us.

"We were disappointed to draw our last two home games and we've a chance to make amends against Russia."

Striker Kyle Lafferty and midfielder Chris Baird miss the Russia match because of suspension but will be available to face Israel.

Paterson's availability is particularly important given Lafferty's absence from the first fixture and the injury-enforced absence of Dean Shiels, who hurt his knee playing for Rangers last weekend.

He will now compete with the likes of Billy McKay, who made his debut in the friendly draw against Malta last month, Will Grigg and Jamie Ward for a starting berth up front.

There are recalls, meanwhile, for experienced midfielders Sammy Clingan and Grant McCann.

Clingan captained the side in O'Neill's second match in charge but was dropped while he looked for a new club earlier this season.

He has since been picked up by Kilmarnock and will be in line to take up Baird's position in front of the back four, a role Alex Bruce will also be eyeing.

Peterborough's McCann, meanwhile, is back and veteran goalkeeper Roy Carroll returns after being excused from the Malta friendly.