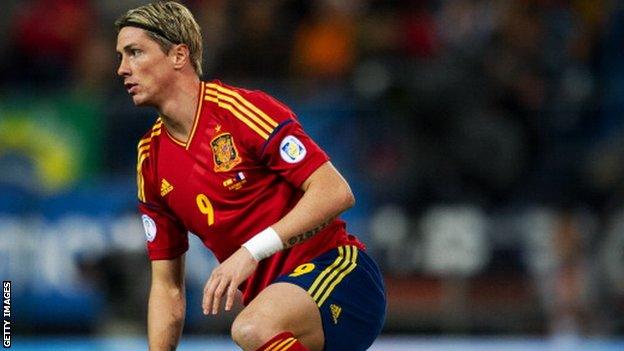 Fernando Torres has been left out of the Spain squad for the World Cup qualifiers against Finland and France.

The 28-year-old Chelsea striker was omitted from recent friendlies against Panama and Uruguay but has made the squad for earlier World Cup qualifiers.

Spain coach Vicente del Bosque said: "Especially for strikers, inconsistency worries us and Fernando's inconsistency provoked a sense of insecurity in us."

Torres has scored 31 goals in 101 appearances for his country.

Golden Boot winner as top-scorer in Spain's victorious Euro 2012 campaign last summer, he has 17 goals in all competitions for Chelsea this season. But he has not found the net in the Premier League in 2013 and scored only his third goal in 20 games as Chelsea beat Steaua Bucharest in the last 16 of the Europa League on Thursday.

He last appeared for Spain as a second-half substitute in the World Cup qualifier with France in Madrid in October.

Other high-profile absentees from Spain's squad include veteran defender Carles Puyol of Barcelona and Real Madrid goalkeeper Iker Casillas, whose injury sees Manchester United's David De Gea return to the squad in search of a first cap. Barcelona keeper Victor Valdes and Liverpool's Jose Reina are also in the squad.

Torres's club-mate Cesar Azpilicueta and Malaga midfielder Isco are both retained after making their international debuts last month against Uruguay.

There is still no place for Swansea's in-form striker Michu, however.