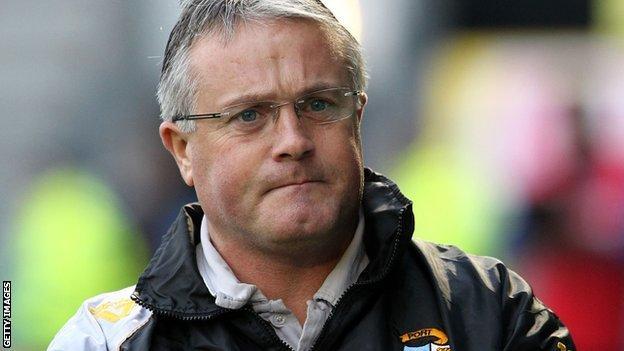 Port Vale manager Micky Adams believes his side have the capability to recover from their "blip" in form.

Vale were top of League Two in early February, but a run of one win in eight games has seen them slip to third.

"If we were third-bottom, that would be a mess. It's a blip, and a run of form we hoped we would never get, but we have," Adams told BBC Radio Stoke.

"Eight games to go, third in the table, and good players in the dressing room. We're not out of it yet."

Vale's top scorer Tom Pope with 25 goals, has not found the net in their last 10 matches

Adams continued: "I know the doubters and the cynics will blame me for it, and I have made mistakes, but not as many as people think I've made.

"I've said it many times before, players win football matches, managers lose them, so we can't win."

Adams's side now lie six points off leaders Gillingham following their dramatic drop in form, and are only two points above the play-off places.

Following their 2-0 defeat at Bristol Rovers on Tuesday, sections of Vale's support let their feelings known about their side's performance.

But Adams has urged supporters to get behind the team as the season reaches a climax.

"I think our fans are fair-minded, but there's always a minority that I don't think understand the fact that if players are going through a crisis of confidence, they aren't helping by booing," the 51-year-old said.

"That's not the way to help players. I have to put an arm around them and protect them. I always will, whether they are doing well or not.

"I would think the fair minded supporters would understand what I'm trying to say.

"We appreciate the support, and let's try and get ourselves out of this mess."