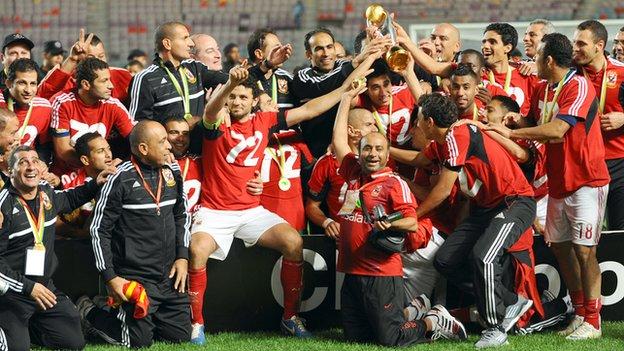 Egyptian side Al Ahly have started their African Champions League title defence with a 2-1 win away to Tusker.

Veteran striker Emad Moteab scored both goals for Ahly with Jesse Were getting one back for the Kenyan champions.

It gives Ahly a useful cushion to take back to Egypt for the second leg of their last-32 tie.

The cup holders fielded a weakened side due to cash problems that forced them to loan out several stars. They were also hampered by injuries.

In addition, injuries ruled out midfielders Ahmed Shehab (pelvis) and captain Hossam Ghaly (knee) while Rami Rabiea and Mahmoud Hassan are with the national under-20 team in Algeria.

The 2-1 defeat is a big disappointment for Tusker who were hoping to pull off only the third victory for a Kenyan side over an Egyptian club in 27 attempts since 1969 in qualifiers for the group phase of the premier African club competition.

Nigeria's Pillars reached the 2009 Champions League semi-finals and served warning that they are planning another strong challenge by whipping a Leopards team that did not concede four goals in any of nine away games last year en route to glory.

Mustapha Musa scored twice during the opening half in a packed Kano stadium, Manir Ubale added a third soon after half-time, Arouna Drame pulled one goal back and Kabiru Umar completed the scoring five minutes from time.

Zamalek of Egypt produced a 1-0 home win over Vita Club of Democratic Republic of Congo. Ahmed Gaafar scored the goal for Zamalek after some good work from Ahmed Hassan and Sabri Rahil who allowed Gaafar to send an unstoppable shot into the far corner.

Orlando Pirates, the sole South African club to win the competition, enjoyed a 1-nil win at Zanaco of Zambia. Ndumiso Mabena scored after five minutes to give the South Africans a useful away goal.

Four-time champions TP Mazembe of the Democratic Republic of Congo were 1-0 winners over Mochudi Centre Chiefs in Botswana, thanks to a goal from Tanzania's Mbwana Samata.

Asante Kotoko of Ghana, who fired eight goals past Ela Nguema from Equatorial Guinea for the second biggest preliminary win, drew 0-0 away to JSM Bejaia in Algeria.

Former champions Esperance of Tunisia were 1-0 winners away to Angola's Primeiro Agosto.

FUS Rabat of Morocco were 3-0 winners at home to Union Douala from Cameroon with Brahim El Bahri opening the scoring on eight minutes. Marwane Saadane converted an early second-half penalty and Mohamed Fouzair added a third to secure a comfortable lead ahead of the second leg.

There were also big wins for Sewe San Pedro of Ivory Coast and Kano Pillars of Nigeria. Sewe beat Al-Hilal of Sudan 4-1 in Abidjan while Pillars triumphed by the same score at home to the 2012 Caf Confederations Cup winners AC Leopards of Congo.

Another Nigerian side, Enugu Rangers,drew 0-0 away to Vital'O of Burundi.