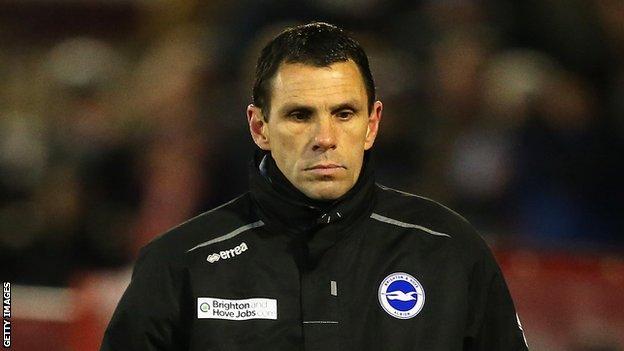 Brighton boss Gus Poyet hopes his side will be able to cope with Crystal Palace's forward line on Sunday.

The Seagulls are one point outside the Championship play-off places and nine behind their rivals ahead of the match at the Amex Stadium.

"You need to manage that situation and take advantage of their weaknesses. You need to be smart, organised and take your chances."

He added: "They have been winning games in the last two or three weeks and not totally deserving to win.

Crystal Palace have scored more goals at home than any other side in the Football League. However, of the teams in the top half of the Championship only Leicester have scored fewer than the Eagles on their travels.

"Their keeper [Julian] Speroni has been outstanding and has been one of their key players, and we know Glenn Murray has been scoring for fun.

"They have key players that you need to try [and make sure] they don't have the best of days."

With both clubs chasing promotion, Poyet knows Albion fans will add extra importance to the meeting of the two sides this weekend.

The Uruguayan hopes he will not witness a repeat of December's 3-0 defeat at Selhurst Park, when Brighton centre-back Lewis Dunk was sent off after eight minutes.

"It was always the biggest game because it is the one the fans need to win and enjoy and the one they demand the players win," Poyet said

"At any time of the season it is important. I want a normal game - I don't want another one like at Palace when we were down to 10 men.

"No hard decisions from the referee, no mistakes - just a normal football game.

"Then you can win, draw or lose, but we will do everything possible to win the game as we need the three points and we are playing against Palace."

Meanwhile, Poyet has been frustrated in his bid to bring in a new striker on loan.

Leonardo Ulloa is currently the only recognised first-team striker available to Poyet following injuries to Will Hoskins and Craig Mackail-Smith, while Ashley Barnes is suspended for seven matches, having seen his four-match ban extended by the FA for appearing to trip the referee in Saturday's defeat at Bolton.

"I'm quite heavily and badly disappointed with this because I didn't expect so many players to be in different clubs not willing to come and play," he said.

"I'm surprised, I thought it would be much easier. Players, clubs, money - nothing came together. Nothing.

"And unfortunately the players that are available today are not good enough for me."