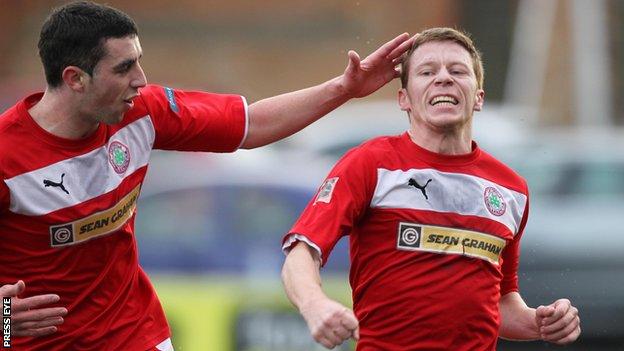 Cliftonville go to Glenavon on Saturday knowing victory in their next two matches will see them on the verge of a first title triumph since 1998.

Two wins would mean they would be at least 14 points clear of Crusaders - with six matches to go - before the title rivals clash on 25 March.

Cliftonville are at home to Ballymena on 23 March.

"It would be great to win the next two. It is all about getting results at this stage," said manager Tommy Breslin.

"There has not been any talk in the changing room about winning the title.

"But maybe, subconsciously, it has affected our form a bit.

"We struggled for long periods last week against Donegal Celtic and we need to improve on that.

"I can see from the performance that people are maybe getting a little bit anxious and uptight, but we will work on that.

"On the last couple of weeks our performances have not been what I wanted. We want to win playing good football."

Runaway leaders Cliftonville will be expected to win their seventh Premiership match in succession against a Glenavon side which has won just two away league fixtures all season.

Cliftonville would go 17 points clear with victory at Mourneview Park as second-placed Crusaders do not play until Monday night when they are at home to Linfield.

Elsewhere in the Premiership, the bottom two clash on Saturday in a crucial fixture. Home club Donegal Celtic are currently five points better off than bottom club Lisburn Distillery.

Whites boss Tim McCann, however, has been heartened by recent displays which include a draw at Linfield and victory over Glenavon.

"It was tough to lose to Crusaders on penalties on Tuesday, but again we did not lose in the 90 minutes," said McCann.

"I have told the players to keep believing in themselves.

"If they maintain the effort and the team spirit, they will get out of this and will be in the Premiership next season."