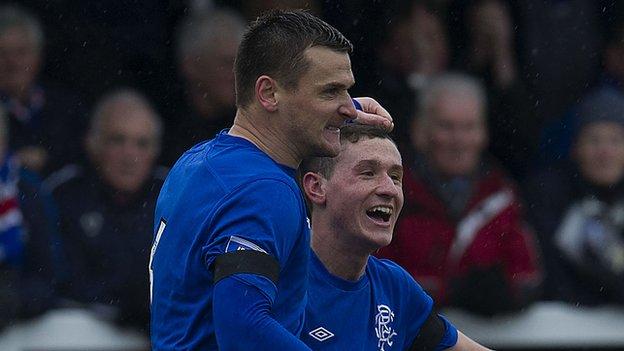 McCulloch converted in the 73rd minute after Lee Wallace had been tripped in the box.

Daniel Moore came closest for the home side, his free-kick narrowly off target.

The visitors finished the match with 10 men, with Ian Black picking up a second booking three minutes from the end.

"He got booked for three or four fouls, the ref said, and rightly or wrongly he was on the yellow card.

"We told him he's got to stay on the park and stay on his feet, and I thought he did.

"I thought the ref handled the game very well but sadly I think he got that one decision wrong.

"I felt there was always a big possibility of him getting sent off after receiving the yellow card, just because of the way he plays the game.

"But to counter that I did think it was extremely harsh."

McCoist also revealed that striker Kevin Kyle has been released by the club.

"Kevin has left the club by mutual consent," he said.

"We have terminated his contract and he goes with our best wishes for the future.

"He got an injury at a very bad time because he got back in the team and scored one or two goals, then got an injury up at Montrose.

"I sat down and explained to Kevin that next season the club is going in a different direction and I thanked him for his services."