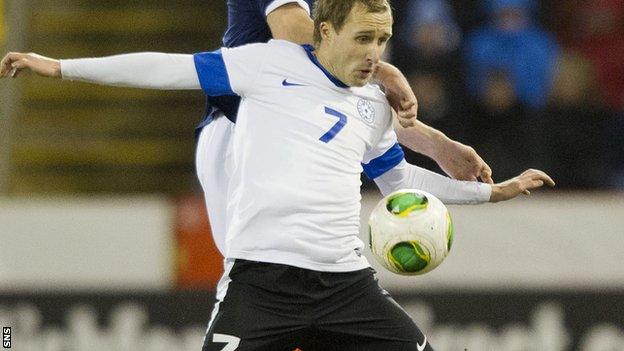 The 24-year-old has agreed a deal until the end of the season, with the Paisley club having the option to extend his contract for a year.

"We've had a good look at him and he's very much the type of player we want at the club," said manager Danny Lennon.

"He has shown great qualities in his time with us."

International clearance has been granted and Puri may be included in Sunday's squad.

"He will fit in very well, both with the group we have here and the style of football we want to play," added Lennon.

"Having seen what he can produce, it comes as no surprise to me that at the age of 24 he has played for his country over 50 times, made over 200 senior appearances and has been on the radar of top clubs such as Borussia Dortmund.

"We look forward to developing him further as a player and blending his qualities into what we have already here."

Puri was previously on trial with Kilmarnock and featured for Estonia against Scotland in February's friendly at Pittodrie.

He has had spells with clubs in Greece, Poland, Hungary and Finland.