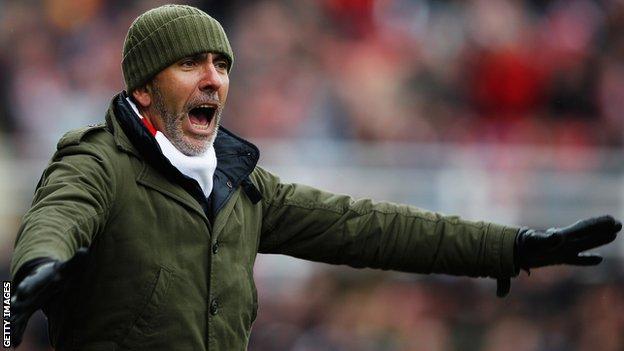 Paolo Di Canio has denied that his visit to the Madejski Stadium at the weekend was linked with the departure of Reading manager Brian McDermott.

The former Swindon boss was pictured in the directors' box at Reading during their 2-1 defeat by Aston Villa.

His presence at the game prompted speculation he could be in line to replace McDermott.

"It was just a coincidence. I was there only to watch the game," Di Canio told BBC Sport.

It is understood Reading have not made an approach for Di Canio.

The BBC Sport columnist would not be drawn on whether he was interested in the Reading vacancy but added: "It is my ambition to manage at the top level."

He has been watching a number of Premier League games since resigning as Swindon manager last month.

He was at Loftus Road for Queens Park Rangers' 2-0 defeat by Manchester United on 23 February, before watching Reading on Saturday.

"I was sat with Stuart Pearce at Reading and we had some discussions about the game," added Di Canio.

"I want to watch games at the top level and [the Madejski Stadium] was full of passion, so it was good to go there.

"Next time it could be Swansea or Southampton or Tottenham, I don't know, but this is what I am going to do for the next few weeks."