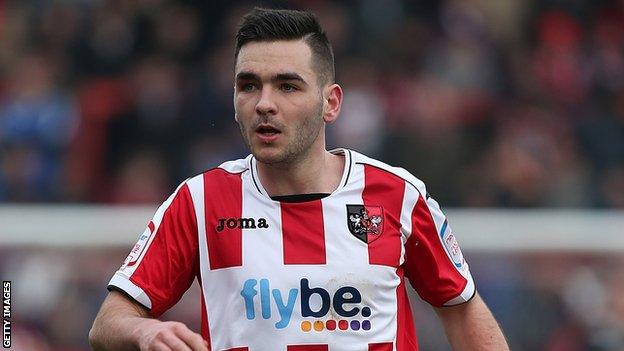 Teenage Exeter City midfielder Jake Gosling is looking to establish himself in the club's first team.

The 19-year-old while on loan at the non-league club.

Since returning to Exeter in January he has played in seven games, including all four this month.

"Hopefully I'm doing OK and proving that I can play at that level and help the team out," he said.

That game against Plymouth was brilliant, but it wasn't as hard as the Conference South.

"I'm not going to get carried away with myself, but I've really enjoyed my time playing with the first team.

"I hope that with my input I can try and help get the team into League One this season."

Gosling scored his first goal in league football in the and impressed after starting Exeter's on Tuesday night.

He has been given his chance because of injuries to the likes of Alan Gow, Tommy Doherty, Liam Sercombe and Matt Oakley as Exeter try and cement at least a League Two play-off place.

"You don't want to see your teammates get injured but that has helped me a little bit," he admitted.

And while he says his time in non-league football helped him considerably as stepped up from the junior game.

"That game against Plymouth was brilliant, but it wasn't as hard as the Conference South," he added.

"You got no time on the ball, you're playing with really physical players, they all want to win and it was good to play men's football.

"I learned to get my body in places where I hadn't before as an Under-18 and it was about strengthening up in the right areas at the right time."