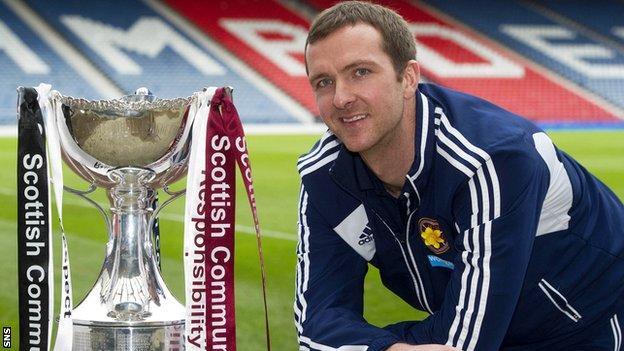 Hearts captain Andy Webster wants a League Cup final win on Sunday to reward the fans that have rallied round the financially-troubled club.

Supporters responded to a share issue to help ease the burden and have turned up in large numbers at Tynecastle despite poor league form.

"The fans have done amazingly well to help the club this season," Webster told BBC Scotland.

"If we can give something back to them it would be a great achievement."

Webster won the Scottish Cup with Dundee United in 2010 before repeating the feat with Hearts last year and the defender admits he is greedy for more trophy success ahead of the Hampden meeting with St Mirren.

"Once you have finished your career you can look back and sit down and look at what has been and what could have been," he explained.

"But it's like anything, the more you experience it the more you want it, and Sunday is another opportunity for us to win.

"We had a great experience last year with the Scottish Cup so it's something we will be looking to replicate on Sunday.

"Hopefully it stands you in good stead. There is a bit of experience.

"A few of us have been here before and know what to expect."

While Hearts have won three Scottish Cups in the last 15 years, League Cup success has eluded them since 1963.

And Webster, who will lead the team in place of of injured skipper Marius Zaliukas, said: "It's been 50 years and you look at some of the Hearts sides of the past. So it's a great opportunity for us to make a little bit of history."

Wage delays have been common place at Tynecastle over the last two seasons, leading to a series of transfer restrictions.

And unpaid tax bills saw HM Revenue and Customs issue a winding up order before a settlement was reached.

Close to a £1m was raised in a share issue, with the money earmarked to service the tax debt, while former players and supporters organised various fighting funds.

Adding to the uncertainty at Hearts was the news last month that the Lithuanian-based bank controlled by club owner Vladimir Romanov had been declared insolvent.

With the squad pruned significantly since last season to cut costs, Hearts have struggled for form this term and sit 10th in the Scottish Premier League - one point ahead of St Mirren.

"You have to concentrate on the football," said Webster, when quizzed about the impact of the club's off-field troubles.

"It's the only thing you can influence.

"I think you can see from our last couple of games that hopefully we have turned the corner.

"We had a great result against St Johnstone and showed good character in the Edinburgh derby and more than deserved the point we got."

Interim Hearts boss Gary Locke says he will be "honoured" to lead the side out at Hampden.

"it will probably be the biggest day ever for me," Locke added.

"Things have gone really well for me in the past two or three years; to lead Hearts out at a major cup final will be a great honour.

"We know how difficult it's going to be as St Mirren have beaten us twice this season. Danny's built a fantastic squad of players."