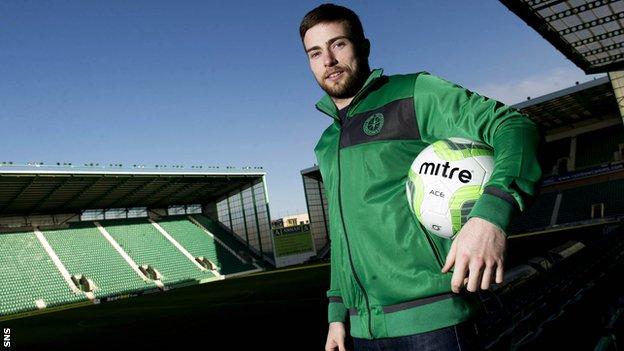 Lewis Stevenson has agreed a new two-year contract with Hibernian.

The 25-year-old, who can operate at full-back or in midfield, made his first team debut in 2005 and has since made 172 appearances.

"Hibs have played a big part in my life and I'm really excited about the future and what we are building," he said.

"If somebody had told me when I first joined Hibs as a 14-year-old that I would still be at the club 11 years later I wouldn't have believed them."

This season Stevenson has been used in central midfield, left-back and right-back.

And the Edinburgh club's longest-serving player added: "I'm happy to play wherever the manager decides I should play - I will always give my all for Hibs."

Manager Pat Fenlon welcomed the news, praising the industry and approach of Stevenson.

"Lewis has a fantastic attitude and he always works incredibly hard for the team - he is a good professional," said the Irishman.

"We are building a club here and one of the key factors behind making that become a reality is continuity, which means retaining important players.

"Ever since I joined the club, Lewis has been great and never sells himself short.

"He always gives everything for the shirt and I'm delighted to have him on board for the next two years."

The undoubted high of Stevenson's eight years at Hibernian was the 5-1 League Cup final victory over Kilmarnock in 2007, when he was named man-of-the-match.

But 12 appearances under John Hughes during the 2009/10 campaign left him contemplating his future.

"There have been times in the past when I thought about leaving when I wasn't playing," he said.

"I've found myself out of the team at times and had to prove myself. I've proved myself a few times now and that must be testament to myself."