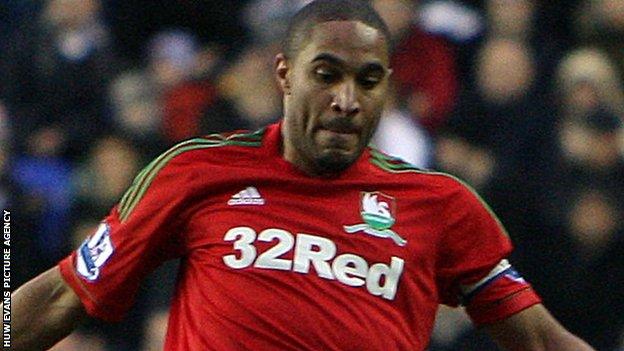 Swansea City boss Michael Laudrup is not surprised Ashley Williams is being linked with other Premier League clubs.

The Wales captain has impressed during Swansea's second season in the Premier League and has been linked with Arsenal and Liverpool.

But Laudrup is hopeful Williams will not leave the Swans during the summer.

"Ashley renewed his contract a few months ago. If he did that I imagine it's because he wants to stay here next year," Laudrup said.

He's having a very good season. When you have success and you are doing well, clubs come in for some of your players

"Otherwise why renew your contract?

"He's having a very good season. When you have success and you are doing well, clubs come in for some of your players.

"A lot of the players have renewed their contracts so I imagine if you renew your contract I don't think it's because you want to leave next season."

Wales manager Chris Coleman has said Williams is good enough to play for one of the top four Premier League sides.

Swansea host Arsenal on Saturday and are looking to complete a Premier League double over Arsene Wenger's side.

The Swans will again be without defender Chico Flores and midfielder Kemy Agustien as they recover from their respective ankle and thigh injuries.

But Leon Britton should be available to play some part after returning to training following the hip injury he suffered in the defeat at West Brom.

Laudrup confirmed left-back Neil Taylor's return from the broken and dislocated ankle which has sidelined him since September.

The Wales international played 45 minutes for the Swansea Under-21 side in their game at QPR on Thursday.

"He has been looking well in training, he has a way to go to get his match fitness back but that will come with games," Laudrup added.

"It's good for him and it is nice to have him back.

"There is a psychological barrier after being out for so long but he is doing well."