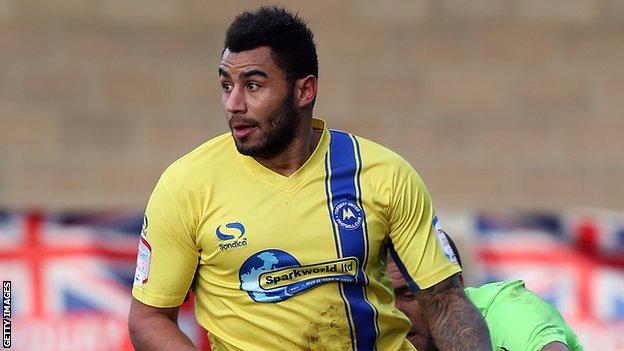 Torquay boss Alan Knill has urged top scorer Rene Howe not to be complacent as the club try to avoid relegation.

Howe's last-minute penalty on Tuesday was his first goal for over a month.

"I think he's someone who should be playing in a higher league, but only Rene can do that," Knill said.

Howe, 26, has been a key part of the Torquay set up since Martin Ling

The former Peterborough striker has scored 29 goals in that time and played more regularly than at any time in his career.

Torquay are in their worst run of form since Howe moved to Plainmoor, having not won since the end of January.

The forward is out of contract in the summer and Knill says Howe can make himself more attractive to other clubs, as well as Torquay, if he can help the Gulls survive in the Football League.

"It's in everybody's interests that Rene is at the top of his game," Knill added.

"Then instead of just getting through the season and having a select group of people requiring your services, us among them, if you play extremely well and score goals then that group widens and you have more choice.

"He's a big presence and when he's on his game he's almost unplayable.

"I speak to managers and coaches and usually the first question is about Rene."