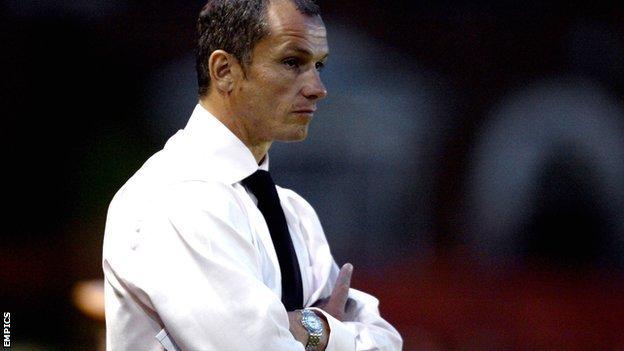 Reading caretaker manager Eamonn Dolan has spoken to Brian McDermott every day since his sacking on Monday.

McDermott was dismissed on Monday, in what owner Anton Zingarevich called the "hardest decision" of his life.

"If ever interest in the Premier League relegation scrap was doubted the congested media conference room on Thursday was a sharp reminder. Dozens of camera lenses and microphones were trained in on the Premier League's latest boss. Dressed in his Reading tracksuit, he looked more relaxed than he sounded. He was in a difficult position, torn between loyalty to his great friend Brian McDermott and the owner Anton Zingarevich. Many thought the owner could have helped him out by facing the questions himself, rather than sending Dolan to the news conference."

"I've spoken to him each day. All he wants is for Reading to get a result," Dolan said.

Dolan, who was previously head of Reading's academy, takes charge for the Royals' Premier League match at Manchester United on Saturday.

Zingarevich spent Wednesday morning at the club's Hogwood Park training ground working with director of football Nick Hammond on the recruitment process for a permanent manager.

Former Swindon Town manager Di Canio told BBC Sport last Friday he was ready to manage in the Premier League, while Poyet is also known to be keen.

It's been a difficult week for everybody, The players were on the floor at the start of the week

Nigel Adkins has also been tipped for the post, although it was reported by newspapers on Wednesday that his availability could be affected if he takes his former employers Southampton to a tribunal following his sacking earlier this year.

Following Saturday's game against the Premier League leaders, the Berkshire club next travel to Arsenal on 30 March, but Dolan said he had not been told by the owner whether a permanent manager would be in place by then.

"The owner has asked me to take the team on Saturday. That's my only thought. That's the honest answer," he said.

Dolan also denied suggestions that Zingarevich would play a part in picking the team to play at Old Trafford.

"He's talked to me about the team and trying to get a result - genuinely that is all he has said."

Dolan said the players had been upset and shocked by the dismissal of McDermott and first-team coaches Nigel Gibbs and Yannis Anastasiou on Monday.

"It's been a difficult week for everybody," he acknowledged.

"The players were on the floor at the start of the week."

Club captain Jobi McAnuff has admitted the players feel responsible for the sacking of McDermott and his staff.

"As players we all feel responsible for the decision that has been made," he told the club's website.

"It's our performances out there on the pitch that dictate results, in that respect we understand the results - particularly of late - haven't been good enough and that's something we are trying our hardest to address."

The Royals have lost their last four Premier League matches and are joint bottom of the division with QPR on 23 points - four adrift of fourth-bottom Aston Villa.