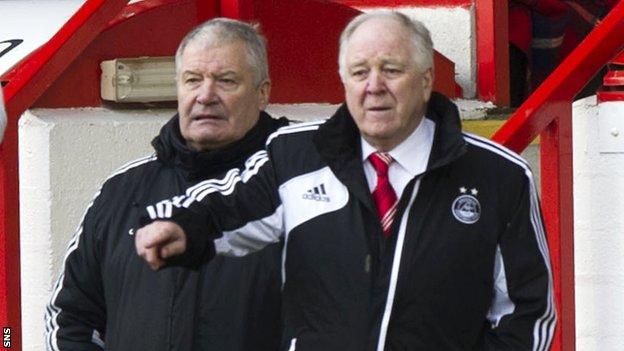 Aberdeen manager Craig Brown is to retire at the end of the season.

Brown, 72, will take a seat on the board as a non-executive director, while his assistant Archie Knox will leave Pittodrie.

"Having reflected long and hard on the situation, I felt the time was right for me to step down," Brown announced.

"I look back with satisfaction on my career and in time I hope we could have delivered success here but I have to be fair to the club, to my family."

The former Scotland boss has been in charge of the Dons since December 2010, following spells at Motherwell and Preston.

Explaining his decision to retire, Brown said: "I feel it's important this is out in the public domain as I don't want anything to distract from the playing side over the next few weeks.

"Archie and I are determined to do whatever we can to help the team finish 2012-13 on a high and we strongly believe we will be leaving a solid base for the next management team to build on.

"We're leaving my successor with an excellent squad. We've got some great young boys coming through and there's terrific potential at this club."

Aberdeen were bottom of the Scottish Premier League when Brown and Knox arrived and the veteran pair steered the club to a ninth-place finish.

The Dons ended the following season in the same spot and currently occupy that position again.

However, Brown views his time at Pittodrie as a success, saying: "When I came up here with Motherwell, we expected three points. That's changed.

"I feel confident in what I've done here. I don't feel in any way embarrassed, I think it's been an exceptionally productive period for Aberdeen.

"We had the most away wins in the last calendar year for 20 years.

"We're criticised for not scoring enough goals but no one mentions we have the second best defensive record in the SPL."

Brown, who was awarded the CBE in 1999 for services to football, played as a midfielder for Dundee and Falkirk before embarking on his managerial career at Clyde in 1977.

He spent almost 10 years with the Bully Wee, working on a part-time basis, before Scotland boss Andy Roxburgh made him his assistant and put the international youth teams in his charge.

Replacing Roxburgh in December 1993, Brown oversaw a record 70 matches and took Scotland to Euro '96 and the 1998 World Cup.

Looking ahead to his new role, Brown said: "I was flattered to be asked to become a director because I love Aberdeen Football Club. There's a family feeling here and you get attached. I didn't think twice.

"It was clear to me that the club was keen for me to remain here and I have a burning desire to see this great club back at the very top of the Scottish game where it belongs."

Dons chairman Stewart Milne thanked Brown and Knox for their efforts and said they had "worked tirelessly to turn the club around".

Milne added: "They are very much a team, as everyone is aware, and the contribution they have made in taking the club forward is immense.

"The staff throughout the club hold them in such high regard and they will certainly be a difficult act to follow.

"Craig will have input to all areas of the club like any other board member and will be a fantastic ambassador for Aberdeen Football Club."