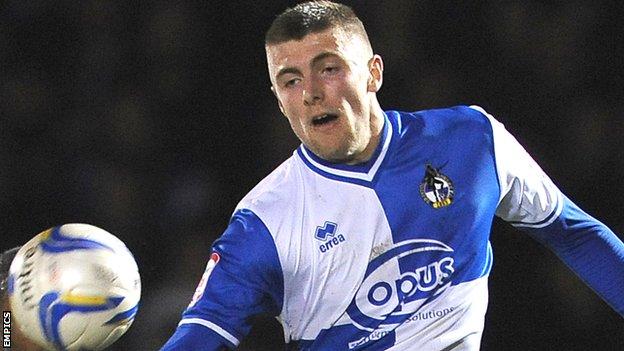 Bristol Rovers boss John Ward has praised the impact of 19-year-old Ryan Brunt since joining the club from Stoke City in January.

The striker has scored five goals in 10 games for the Pirates and bagged a brace in Tuesday's win over Port Vale.

"He's a good kid, one of the quiet guys in the dressing room but everybody's mate," Ward told BBC Radio Bristol.

I've worked with a lot of teams and groups of players. This group is right up there in terms of togetherness

"He's had an injury and fought back. He's got a lot of character in terms of his own strength in what he can do."

Ward took over as Bristol Rovers boss in December and has led them out of the League Two drop zone to 15th, 11 points clear of the relegation places.

The turnaround in fortunes has been built on an excellent home record, with Rovers winning six of their last eight at the Memorial Stadium.

"Everyone is having a go for the club at the moment and we are getting some nice rewards," Ward continued.

"Their work-rate and their response to everything we've been trying to do has been magnificent.

"I've worked with a lot of teams and groups of players. This group is right up there in terms of togetherness."