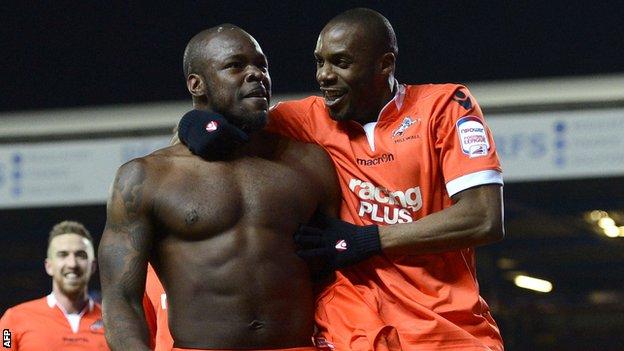 Danny Shittu has said "words cannot describe" the feeling after he headed Millwall into the FA Cup semi-finals.

The centre-back celebrated wildly as he scored the only goal in the replay with Blackburn to set-up a Wembley clash against Premier League side Wigan.

"Words cannot describe it," the 32-year-old said. "To have got the goal means so much, I'm happy for the lads and for the gaffer [Kenny Jackett].

"It is a big day and either side can win when we play Wigan."

After a scoreless meeting at The Den on Sunday, Millwall edged a tight contest at Ewood Park in which they restricted Rovers to few chances.

While the Lions were the better team in the tie, Shittu's goal came from a first-half corner which replays suggested should not have been awarded.

"We have had plenty of decisions go against us, and perhaps that is a crucial one that has gone for us," manager Kenny Jackett said.

"But, it was a great header from Danny Shittu for the goal. We want to go there and win, that is what Wembley is about."

"I think it is debatable but ultimately whether it is given or not, you've got to make sure that you deal with it and you can argue about it later," he said.