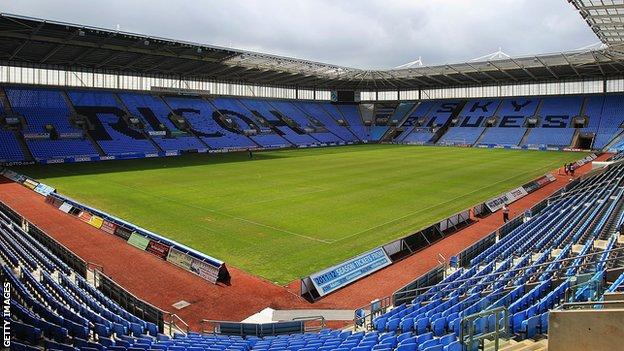 Coventry are facing the threat of administration after the owners of the Ricoh Arena went to the High Court claiming they are owed £1.3m in rent by the League One club.

Arena Coventry Limited (ACL) wants the court in London to issue an administration order against the club.

The Sisu consortium, which has owned the Sky Blues since December 2007, disputes the terms of the lease.

The date for the High Court hearing has been set as 22 March.

ACL chairman Nicholas Carter said: "It is highly unfortunate that we have had to take this course of legal action. Had we not taken this action, then the alternative might have been catastrophic for CCFC.

"We are owed a considerable amount of money in rent arrears. While it is imperative that ACL takes action to recover these arrears and to stop the arrears growing, it is important for us to find a solution that can provide for the survival of the Sky Blues.

"Hopefully this action will ultimately put CCFC on a stable financial footing for the future."

In response, Coventry chief executive Tim Fisher said that following the breakdown in talks with ACL, a High Court hearing "was one eventuality [they] have had to prepare for."

He added: "We are consulting with our professional advisers in order to find the best way forward to try to minimise the damage to the club and we will be keeping supporters informed of any developments.

"In terms of the day to day affairs, it is business as usual as we have to make sure we are all fully focused on Saturday's important game against Hartlepool United."

Fisher has previously admitted that insolvency was a serious possibility.

On the field, Coventry are currently ninth in the table, having appointed Steven Pressley as manager on 8 March following the departure of Mark Robins to Huddersfield.