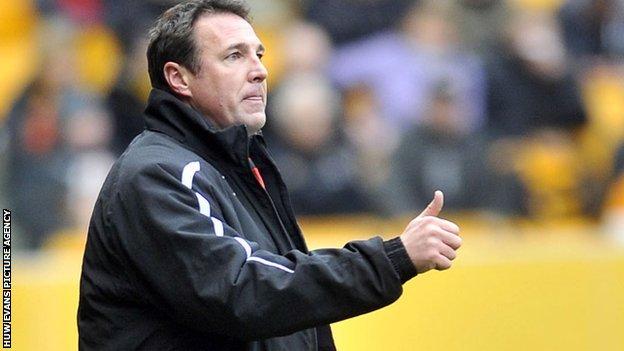 Cardiff City have the experience to clinch promotion to the top flight, according to manager Malky Mackay.

The Bluebirds lead the Championship by four points after Tuesday's 1-1 draw with Leicester City.

One win in their last five games has raised questions about their ability to deal with the pressure, but Mackay is unfazed.

"I think we've got the experience in the dressing room which counts," said the Scotsman.

Cardiff have been top of the table since November, but are suffering their worst run of form which has seen an 11 point lead in January whittled away by the chasing pack.

They have a game in hand over second placed Hull City and are six points clear of Watford in third, who have also played one game more than the Bluebirds.

And Mackay is confident his team have the credentials to see out the season successfully.

Haidar Helguson and Tommy Smith were part of the QPR team promoted in 2011.

Ironically, Fraizer Campbell was at Cardiff's nearest rivals Hull when they reached the top flight in 2008.

"[We have] the staff and certain players who have won titles and been promoted before and that makes a big difference," said Mackay.

He believes the key to promotion is sticking with the formula which has served them well so far.

"We just look at the game that's in front of us," he said.

That game is against Sheffield Wednesday on Saturday, a team managed by Dave Jones, who Mackay replaced at Cardiff.

Jones was in charge at the Bluebirds when they lost 3-2 to Blackpool in the Championship promotion play-off final in 2010 - the closest Cardiff City have been to the top flight since the 1950s.

And Cardiff lost in the play-off semi final under Mackay last season leaving fans desperate for the club to avoid the end-of-season lottery after dominating the league this season.

But with 10 matches left, Mackay says he isn't setting any points targets for his team.

"We are the same as every other team in terms of analysing the averages," he conceded.

"We know that on average 75 [points] gets you into the play-offs and that 85 to 90 points gets you promoted automatically.

"But we haven't ourselves a target in terms of X amount of wins will do it for us. It's one game at a time."