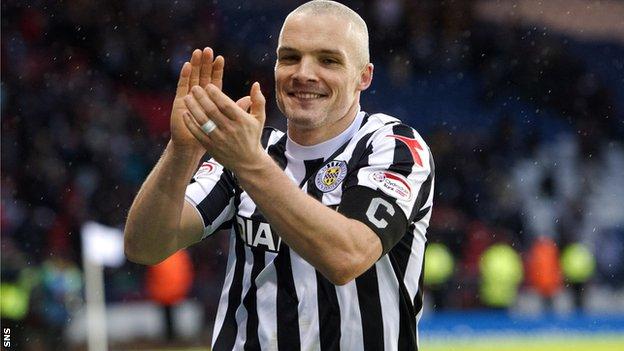 St Mirren captain Jim Goodwin thinks he will be fit to play in Sunday's League Cup final against Hearts at Hampden.

The midfielder has not featured for Saints since straining his calf in the 1-0 defeat to St Johnstone in February.

"I've had a little niggle for the last couple of weeks and I've just been resting it up making sure I'm ready for the big one on Sunday," Goodwin said.

"It's nothing serious. With this game around the corner it seemed a bit stupid to risk it in the other games."

St Mirren manager Danny Lennon took his squad for two days training and relaxation in St Andrews this week as part of the Paisley side's preparation for the showpiece match.

"There's not been a day gone by in the last couple of weeks when I've not thought about the final," Goodwin told BBC Radio Scotland.

"It seems like an age since the semi-final victory over Celtic, so we're all just delighted the final's nearly here and we can get on with the game.

"The buzz about the schools and community of Paisley as a whole is absolutely fantastic. It's given the whole town a lift and it drives home the importance of Sunday."

You have to go back 26 years for Saints' last major domestic cup triumph.

"It definitely is inspirational," said Goodwin.

"You see the open-top bus going around Paisley in 1987 with thousands of people out greeting and congratulating them.

"We go into St Mirren Park every week and the pictures of that team are up all over the place, so it would be fantastic to put our own pictures up there among them.

"It's a great opportunity for myself and the rest of the boys in the team to make a piece of history - 26 years is a long time and it would be great for us to get a bit of present-day success."